The low back pain in patients with hip osteoarthritis: current knowledge on the diagnosis, mechanism and treatment outcome

The osteoarthritis (OA) in hip is popular in aging population and symptomatic hip osteoarthritis (HOA) has been reported in 9.2% adults aged more than 45 years, significantly limiting their activities and quality of life (1,2). Despite the isolated occurrence of HOA, the coexistence of hip and lumbar spine disorders are common. In patients with end-stage HOA, the incidence of concomitant low back pain (LBP) varied from 21.2% to 49.4% in large cohort studies (3-5) and was even as high as 100% in a study with a small sample size (6). Offierski and MacNab (7) firstly described the association of HOA and LBP as hip-spine syndrome (HSS) in 1983; they categorized this syndrome into four types: (I) simple HSS: pathologic changes in both the hip and lumbar spine with one clear source of disability and pain; (II) complex HSS: the lumbar spine and hip were symptomatic and the source of disability was not clear; (III) secondary HSS: the pathology in the hip and the spine are inter-related, (IV) misdiagnosed HSS: the source of pain was not correctly diagnosed.

The diagnosis of HOA is relatively easy for joint surgeon according to the clinical symptom and radiographic pathology. However, the identification on the source of LBP is more complicated. Sometimes the LBP caused by HOA could be thought as the result of lumbar disorders and treated with lumbar spinal surgery (Figure 1). This review paper aimed to summarize the current knowledge in diagnosing the source and the mechanism of LBP in patients suffering end-stage HOA, and the outcome of LBP by treating hip disorder. 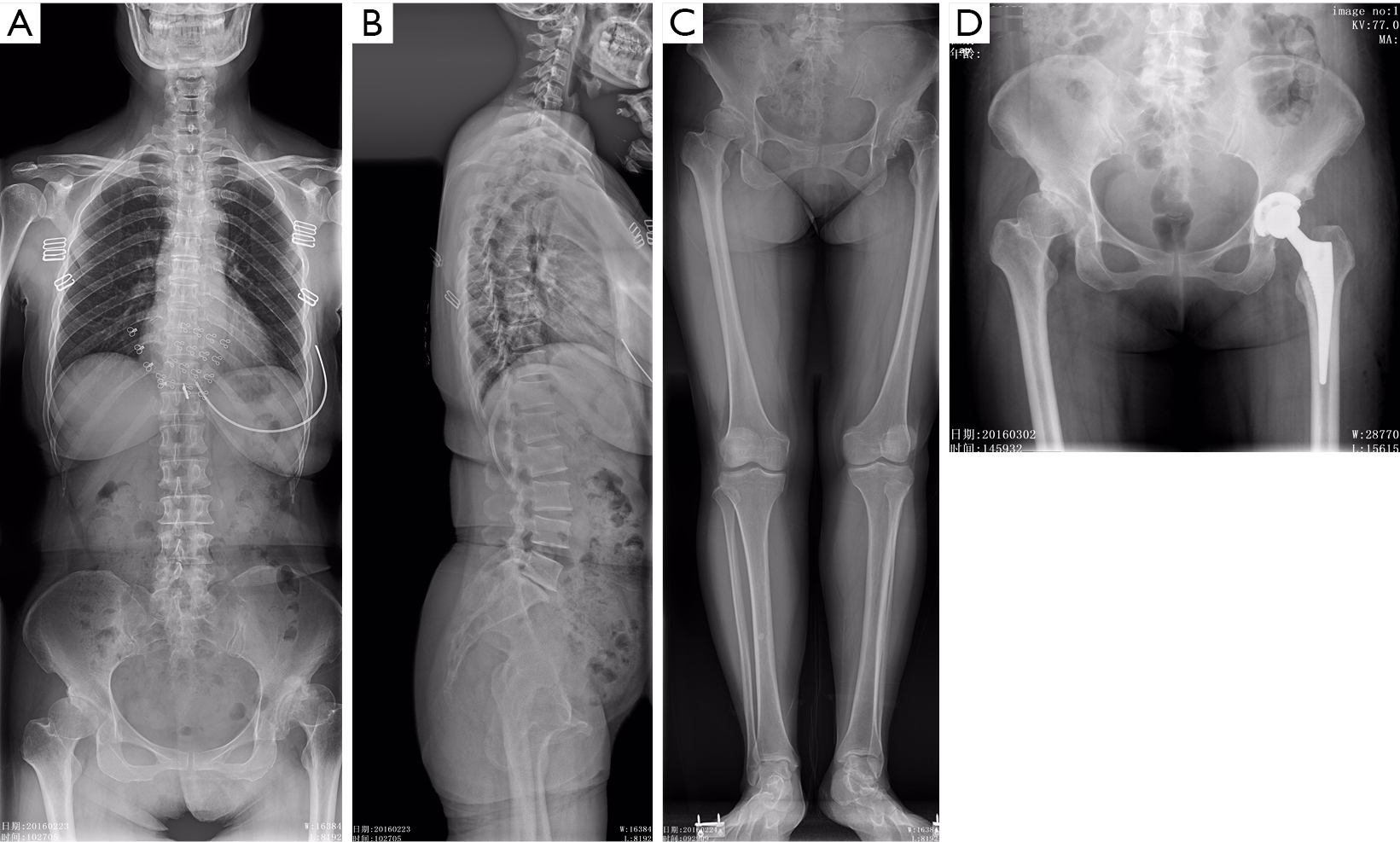 Figure 1 A female aged 51 years complained pain in low spine for 9 months. She had pain in low back and low leg 1 year ago. Radiographic examination confirmed a L5/S1 disc herniation. Then L5/S1 discectomy was carried out. The symptom was improved after that but recurred 3 months later. At 1 year after operation, she came to our clinic and a comprehensive X-ray films were taken (A-C); developmental dysplasia was identified in both hip, with narrowed joint space. Since the osteoarthritis was more severe in left hip, total hip arthroplasty was carried out (D) and the patient reported significant relief of pain in both spine and low leg.

Diagnose the source of LBP

The identification that whether the LBP was caused by spinal disorders or secondary to the HOA is critical for further treatment strategy making. However, it should be noted that the pain caused by either HOA or lumbar spinal disorders could locate in groin, buttock, thigh or under knee (8), in some patients it’s quite challenging to identify the source of the LBP. However, the distribution pattern of pain in patients with HOA might be different from that in patients with lumbar spinal disorders. The pain caused by HOA is more common in groin and buttock. By analyzing the distribution of pain in patients awaiting primary hip arthroplasty, Khan et al. (8) found the presence of groin pain and buttock pain were 84.3% and 76.4% of those sensitive for hip dysfunction with a specificity of 70.3% and 61.1%, respectively, while the pain in patients awaiting spinal decompression for confirmed spinal stenosis were more common in anterior thigh, anterior shin and calf. In 443 HOA caused secondary to developmental dysplasia of hip, Nakamura et al. (9) reported that the origination of pain was most common in the groin (89%), and 95% of pain was located in the hip region (including groin, buttock and greater trochanter). In contrast, Lesher et al. (10) found buttock pain was the most common pain referral area from a symptomatic hip joint (72%), followed by thigh (57%) and groin (55%). The pain refer to area below the knee was uncommon in the study by Nakamura et al. (9) (8%) and by Lesher et al. (10) (8%), but was reported in 47% of patients by Khan et al. (8) Patients with lumbar spinal disorders, such as spinal stenosis or lumbar disc herniation, could result in radical pain in the low leg extending to the calf, together with LBP. In addition, the pain would be deteriorated by ambulation but relieved with sitting.

In addition, by physical examination, patients affected by HOA could present as limp and reduced hip range of motion, especially the flexion, internal and external rotation. In contrast patients suffering lumbar disc herniation would positive straight leg raise test, while those with spinal stenosis may not present a positive neurologic deficit. Brown et al. (11) found the presence of a limp, groin pain, or limited internal rotation of the hip significantly predicted the diagnosis of a disorder as originating primarily from the hip, as opposed to originating from the spine.

The mechanism of LBP caused by HOA

According to Offierski and MacNab (7), the patients experienced symptoms in both the hip joint and the spine but only showed pathology in the hip joint was described as “secondary” HSS. The authors (7) proposed that the mechanism of “secondary” HSS might be due to the fixed flexion deformity of the hip, result in pelvis forwards inclination and exaggerate the lumbar lordosis, which subsequently results in further subluxation of the posterior facets and may trigger LBP. Regional abnormalities in sagittal pelvis alignment have been reported in a few studies (12,13). Yoshimoto et al. (12) found that patients with HOA had significantly higher PI, SS and LL compared with those who had LBP. They (12) proposed that a higher PI in younger individuals may contribute to the development of HOA in later life because of the anterior uncovering of the acetabulum. In contrast, Sariali et al. (13) found that patients with HOA showed comparable PI but significantly low SS than did asymptomatic healthy volunteers. Recently, Weng et al. (14) compared the global sagittal spine-pelvis-leg alignment in patients with severe HOA and asymptomatic control, the authors found the patients with HOA showed comparable sagittal morphology of pelvis (similar PI), significantly higher pelvis anteversion (higher SS and lower PT), spinal forward inclination (significantly smaller C7T, larger SSA) and hip flexion contracture (significantly smaller PFA but larger FI), but comparable LL. In addition, the patients with HOA had a significantly greater incidence of imbalance than did the controls (22.4% vs. 3.1%, respectively). Hence the study by Weng et al. (14) was in agree with Offierski and MacNab (7) that there are hip flexion contraction in patients with HOA, leading to forward inclination of the spine and a high incidence of severe unbalance in sagittal alignment. However, a comparison between the HOA patients with or without LBP showed no significant differences in the radiographic parameters and global sagittal balance patterns, suggesting there might be other factors involved in the mechanism of the LBP secondary to HOA.

The reduced range of motion in hip joint was also found be involved in the mechanism of LBP. Several studies have reported reduced internal rotation of the hip in athletes or general population suffering LBP (15-19). In addition, the limited hip flexion (20), reduced hip abduction (21), total rotation (17,22,23) and asymmetric hip rotation were also identified in patients with LBP. Hence it has been proposed by previous studies (20,24) that reduced ROM of the hip might contribute to the pathogenesis of LBP, by leading to a greater lumbopelvic rotation in compensation, subsequently inducing increased mechanical stress in the lumbopelvic region. In patients with HOA, the hip function accessed by the Western Ontario and McMaster Universities Arthritis Index was found to correlate significantly with LBP (2), and limitation of flexion has been identified as an independent risk factor for LBP (25). Hence further study should be carried out to explore the role of reduced hip ROM on the LBP in patients with HOA.

The outcome of LBP caused by HOA

Despite the high prevalence of LBP in patients with HOA, it’s luckily to note that the LBP in these patients have high chance to be relieved by THA (3,6,26,27). At 1 year after THA, Staibano et al. (3) found that LBP rated as “moderate” to “worst imaginable pain” was significantly improved in 54% (44/82) of patients with HOA, and Parvizi et al. (5) reported resolution in 113 of 170 patients (66.5%). However, these studies did not exclude disorders of the lumbar spine, and could not distinguish whether the remaining LBP was caused by pathogenesis in the hip or the spine. By further analyzing the 150 patients with spine work in the study by Parvizi et al. (5), Weng et al. (27) found that LBP was resolved in 72 (92%) of 78 patients without spinal disorders, but only in 41 (57%) of 72 patients with spinal disorders. In addition, Weng et al. (27) studied the change of LBP in patients with HOA but free from spinal disorders. They found (27) that the LBP was completely relieved in 43.5% and significant improved in 56.5% at 1 year after THA, presenting significantly decreased VAS score for the back compared with that before THA. None of the patients required any medication to relieve the LBP by the time of the final follow-up.

Offierski and MacNab (7) believed that by correcting the flexion deformity of the hip, the pelvic rotation and the hyperlordosis of the lumbar spine in patients with HOA would be overcome, resulting in the relief of spinal symptoms. Recently this hypothesis was studied by Weng et al. (27) The sagittal spine-pelvis-leg alignment in patients with severe HOA comorbid with LBP was analyzed before and at 1 year after THA. The authors found that the patients showed had significant improvement in hip flexion and spinal imbalance, no significant change in pelvic rotation and LL at 1 year after surgery. They believed that these changes might reduce the tension of the back muscles and contribute to the relief of LBP (27). The THA on the indexed hip would also improve the ROM of the hip, i.e., medial and lateral rotation of the affected hip (24,28), and then reduce the asymmetry in the range of hip rotation, which subsequently contribute to the relief of LBP (17,22).

The LBP is very common in patients suffering HOA. It’s critical to diagnose the course of LBP in these patients so that proper treatment protocol could be made. Both the abnormal sagittal spine-pelvis-leg alignment and reduced hip ROM might be involved in the mechanism of the LBP, hence restoration of the alignment and improve the hip ROM should be aimed in treating the HOA, such as THA. It should be kept in mind that majority of the LBP would be improved after THA, which meaning the THA procedure is not only treating the hip pathology, but also the LBP in patients without spinal disorders.

Funding: This work was supported by Project for Distinguished Young Scholars supported by Medical Science and technology development Foundation, Nanjing Department of Health (JQX13008), and The Six Categories of Top Talents, Jiangsu Provincial Department of Human Resources and Social Security.