Effects of romosozumab on low bone mineral density or osteoporosis in postmenopausal women: a systematic review

Osteoporosis is characterized by reduced bone mass and deterioration of the skeletal microstructural (1). It is predicted that about 14 million American people aged 50 years or older will be with osteoporosis by 2020 (2). As shown in the investigating, nearly 13 million Japanese women have osteoporosis (3). Despite all this, most people do not receive regular anti-osteoporosis therapy around the globe. Even suffering fracture, more than 75% of patients are absent from pharmacologic treatment for osteoporosis (4).

Alendronate can inhibit bone resorption and is used as first-line drug treating osteoporosis. In a trial, postmenopausal women treated with alendronate had less risk of fractures than those treated with placebo (12). To be different from alendronate, bone-forming therapy increases bone mass by stimulating bone formation. Teriparatide is one of bone-forming agents and works by improving remodeling activity (13). Despite teriparatide boosts trabecular bone mineral density (BMD), the promoting in bone resorption during up to 24 months of therapy has an association with a reduce in volumetric BMD (vBMD) of the cortical bone at the hip (14).

We searched the PubMed, Cochrane library, and EMBASE databases from the inception dates till March 12, 2019, using the keywords romosozumab, postmenopausal women, and osteoporosis to identify published RCTs meeting inclusion criteria. Only studies restricted to English with the full text available were included.

Studies were selected according to the following inclusion criteria: (I) RCTs comparing romosozumab, romosozumab + alendronate, or romosozumab + denosumab with placebo, alendronate, teriparatide, or placebo + denosumab; (II) trials enrolling postmenopausal women with low BMD or osteoporosis; (III) trials providing data of BMD or bone formation marker PINP and bone resorption marker CTX. Exclusion criteria were (I) randomized trials without a placebo or treatment group; (II) a history of vertebral fracture or a fracture of the wrist, humerus, hip; (III) a history of metabolic bone disease; (IV) current hypercalcemia, hypocalcemia, hyperparathyroidism or hypoparathyroidism; (V) participants if they had recent use of a medication affecting bone metabolism.

The methodological quality for the included RCTs was evaluated independently by 2 researchers on the basis of Cochrane risk-of-bias criteria, and each quality item was graded as low risk, high risk, or unclear risk. The 7 items used to assess bias in each study included the randomization sequence generation, allocation concealment, blinding of participants and personnel, blinding of outcome assessment, incomplete outcome data, selective reporting, and other bias.

A narrative synthesis was conducted under specific headings according to the framework by the Economic Social and Research Council. The narrative synthesis process was exploring relationships within and between the extracted data to find out how different studies contributed to the specific headings. Accurate findings from included studies were grouped together and reported by using appropriate descriptive statistics. 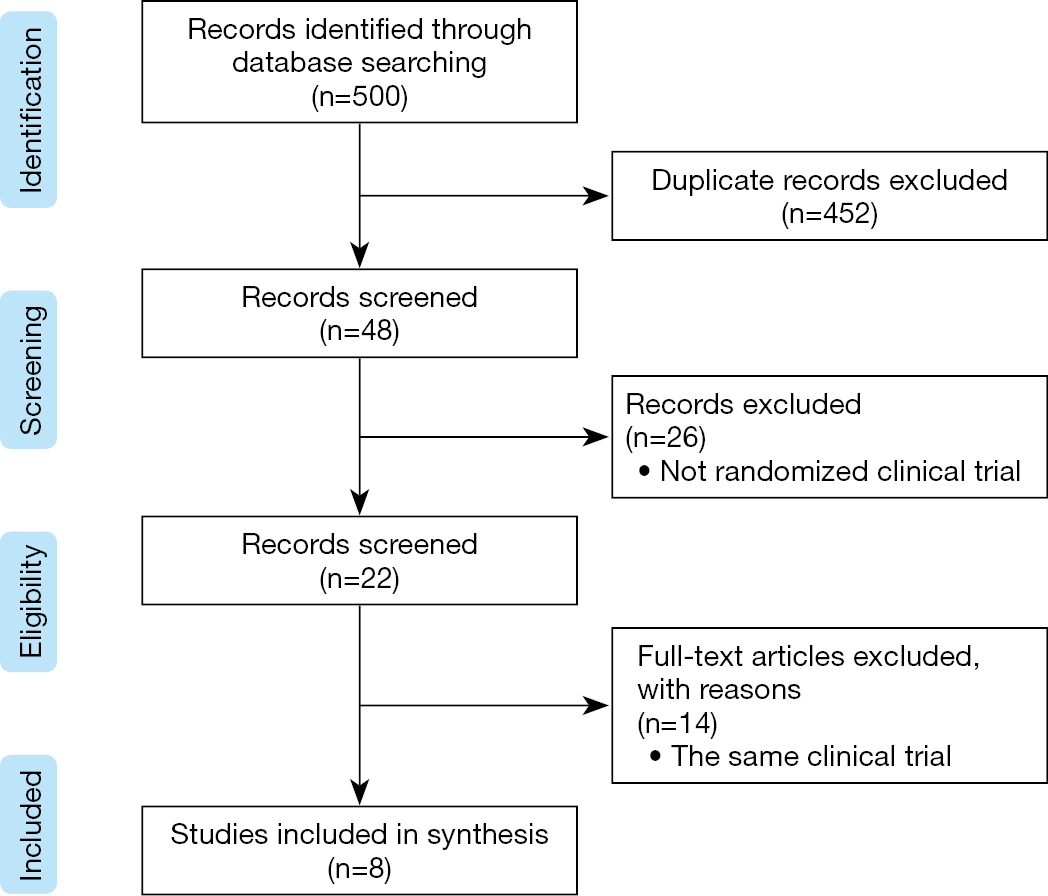 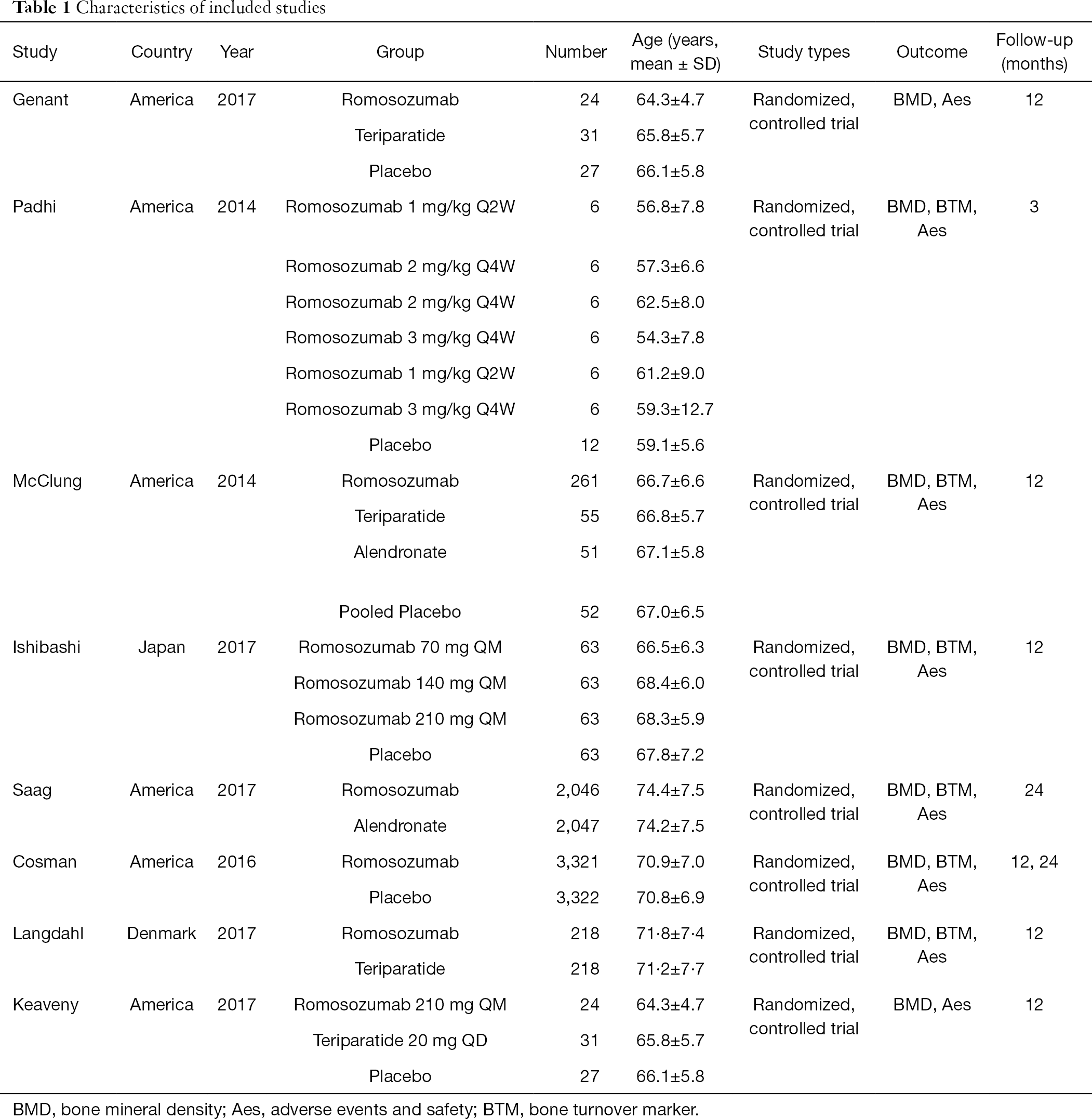 It was shown that romosozumab significantly increased BMD from baseline compared with placebo (18). Particularly, several studies have suggested that BMD of the lumbar spine was increased from baseline in comparison with placebo (2,11,16,19,20). McClung et al. (19) found that the results had statistical difference whether dose frequency (monthly or every 3 months) or dose level (140 or 210 mg). Ishibashi et al. (20) discovered that dose-dependent effect of romosozumab on BMD were existed in postmenopausal Japanese women with osteoporosis. It was also observed that BMD of the total hip and femoral neck was increased compared with placebo group in varying degrees (11,16,19). However, in another study, no significant difference was found in the risk of nonvertebral fracture at 24 months in both romosozumab group and placebo group (11).

Padhi et al. (2) found that the serum level of the bone-formation marker PINP was increased from baseline at all romosozumab doses. Moreover, serum concentration of PINP of the subjects using romosozumab was significantly higher than that in the placebo group. McClung et al. and Cosman et al. (11,19) discovered that the level of P1NP increased rapidly in the early time (month 1 or day 14), then declined to baseline level (between months 2 and 6 or at 12 months). Almost all studies (2,11,19,20) included on this topic showed that the level of the bone-resorption marker CTX decreased from baseline early, remaining below placebo and below baseline through the whole follow-up period, while it was an exception for women with dose of 1 mg/kg Q2W (2).

From the results of the included studies, we knew that alendronate and teriparatide could be good drugs for treatment of osteoporosis. However, alendronate may decrease the level of PINP when it inhibits bone resorption and teriparatide may increase CTX when it promotes bone formation. Romosozumab increased bone formation and reduced bone resorption, the effect of which was also superior to alendronate and teriparatide. In animal test, some researchers (21) examined the effect of romosozumab on bone quality in ovariectomized cynomolgus monkeys. In accordance with the included studies, the result showed that it was increased in bone mass, architecture, and bone strength. In general, the occurrence rate of adverse events was rare with the treatment of romosozumab. Otherwise, the study of Chouinard et al. (22) suggested that romosozumab would not generate a carcinogenic risk to humans. Nevertheless, serious cardiovascular events using romosozumab were a little more than those using alendronate and teriparatide. And this disadvantage will influence physicians to prescribe romosozumab and may remain obstacles to accept the new therapy for patients (23).

Our review firstly systematically showed the effect of romosozumab on osteoporosis and preventing fractures compared with various kinds of drugs or placebo. Compared with the study of Liu et al. (24), our review had more advantages such as the enlarged the enrolled subjects. Because the increased participants would improve the reliability of treatment effect of romosozumab. Except evaluating the changes of BMD, we also paid attention to the variation of bone turnover markers involved PINP and CTX. In addition, assessment of adverse events and safety could not be ignored for any drugs, therefore we review all the descriptive adverse events and safety in the included studies.

There are several limitations of our systematic review. Firstly, we have not analyzed quantificationally the outcome by different doses of romosozumab compared with different drugs at various time points as the studies were still lack. Secondly, most of the included studies derived from Europe and the United States, which resulted in some bias of research participants. Thirdly, due to the short space, we did not present all results of every study and showed the main information in each paper.

Romosozumab increased BMD greater compared with alendronate, teriparatide, or placebo. In addition, romosozumab markedly increased bone formation markers and continually decreased bone resorption markers. However, the cardiovascular effects were main adverse events for romosozumab and the incidence was a bit higher than that with treatment of alendronate or teriparatide. It requires more researches of romosozumab as a therapy for patients with osteoporosis to validate the treatment outcome.

Funding: This work was supported by grants from the Science and Technology Program of Zhejiang Province (2017C37119). The authors thank their colleagues at the Department of Orthopedics, Huzhou Central Hospital and Medical College of Zhejiang University.