The concept of hip resurfacing is credited to Smith Peterson with his hemi-resurfacing mould arthroplasty in 1948 (1). A lack of reliable fixation and unpredictable outcomes limited its widespread use. In the 1960s, the Charnley low friction total hip arthroplasty was developed. Its success demonstrated the ability of polymethylmethacrylate cement to achieve durable implant fixation, and the acceptable wear characteristics of a cobalt chromium femoral head articulating with a polyethylene acetabular shell (2). Despite excellent results in older patients, concern over implant longevity limited its use in younger patients (3). Hip resurfacing was re-visited as an attractive alternative in younger patients, with the theoretical advantages of bone conservation and easier, simpler revision.

In the 1970s, the total hip articular replacement using internal eccentric shells (THARIES) was developed based on the success of the CoCr-on-polyethylene Charnley total hip arthroplasty. Its design included an all polyethylene, cemented, acetabular liner and cemented cobalt chrome femoral head (4). Other similar designs of the same era included the Indiana Hip resurfacing and Wagner hip resurfacing (5,6). Outcomes were comparable to those of total hip arthroplasty designs available during the same time period with good short term outcomes but poor long term survivorship, primarily due to polyethylene wear and acetabular component loosening (7,8). The cementless, porous surface replacement (PSR) designs succeeded the THARIES in the 1980s and utilized porous coating or sintered beads for bone fixation on both the acetabular shell with modular polyethylene liner and the cobalt chrome femoral component (9). These designs, while able to achieve adequate initial cementless fixation, failed at a similar rate as the THARIES, but with more failures of the femoral than acetabular component seen due to high wear rate of the thin polyethylene line (10).

By the early 1990s, it was recognized that high rates of polyethylene wear from large femoral heads were responsible for the osteolysis and aseptic loosening of these early designs. At the same time, improvements in small diameter head metal-on-metal total hip arthroplasties had led to newer designs with encouraging early results (11). Building on the knowledge of failed implant designs and careful examination of large head metal-on-metal McKee-Farrar components with good long term survival, McMinn and Wagner both developed metal-on-metal hip resurfacing arthroplasties in the early 1990s and brought hip resurfacing into its modern era (12,13).

In the more than 20 years since the first modern, metal-on-metal hip resurfacing was implanted, its advantages over traditional total hip arthroplasty in young, active patients have been well established. However, concern over complications from metal wear has continued to limit its widespread use. The history of modern hip resurfacing has taught us that implant design, patient selection and surgeon experience are all critical to achieving a successful, long term result.

The incidence of dislocation after primary total hip arthroplasty ranges from 0.3% to 10% and may lead to the need for revision surgery (18). The metal-on-metal bearing used in modern hip resurfacing allows for the use of larger femoral heads than total hip arthroplasty. As a result, dislocations are rare after SRA with an incidence of around 0.5%, lower than after primary THA (19,20).

SRA also has a potential functional advantage over THA. A recent systematic review by Hellman et al. found that compared to THA patients, SRA patients demonstrated superior UCLA activity scores, increased return to heavy activity including sport and manual labor, less thigh pain and superior quality of life scores. Although Harris Hip Scores were not significantly different between SRA and THA in the studies included, the authors concluded that SRA has the potential to provide improved outcomes in active individuals (24).

Several modern hip resurfacing designs have been utilized over the past 20 years (Table 1). The vast majority have been recalled or removed from the market due to high failure rates. Medical device approval processes failed to detect manufacturing and design specific features that made some implants more prone to catastrophic wear and failure. As a result, several SRA designs were approved for clinical use and were in widespread use before these issues were recognized. 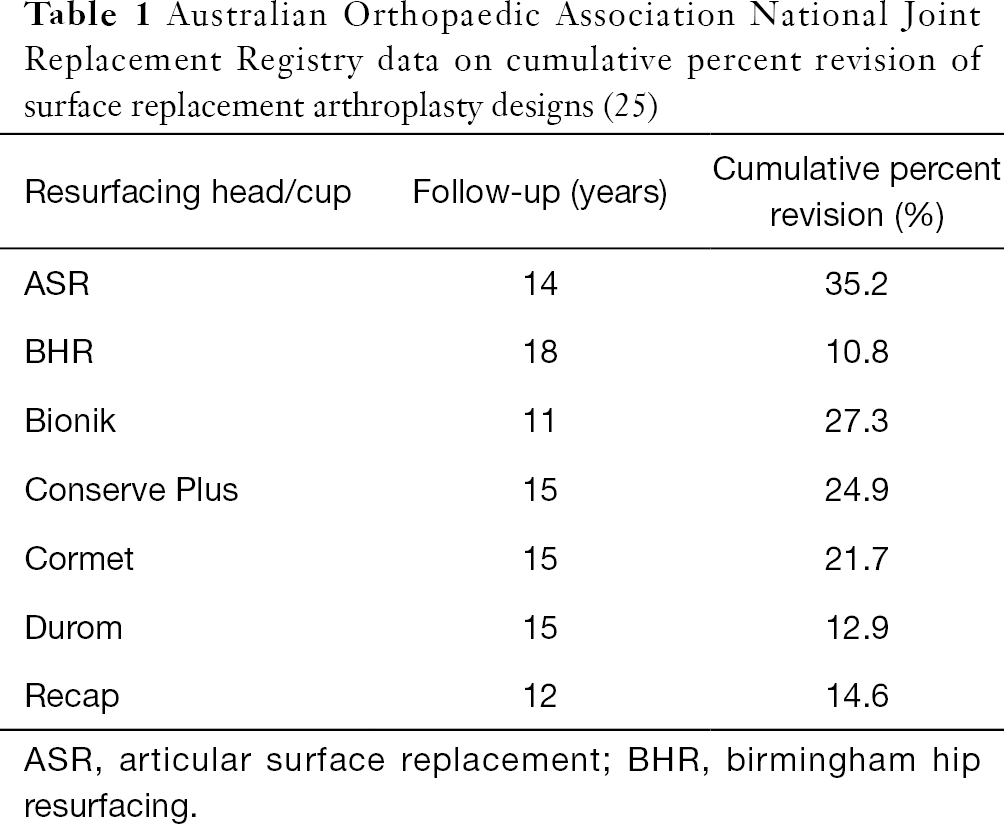 At the time of development of most modern hip resurfacing designs, medical device approval processes in Europe and the United States allowed for the approval of use of devices with proven equivalence to similar devices already in clinical use. Unfortunately, the in vitro wear simulator testing used as a major part of this pre-market approval process failed to accurately mimic in vitro conditions. Specifically, the simulators relied on high frequency, continuous conditions, leading to exaggerated lubrication conditions that artificially protected the bearings from wear (25). These tests were not reflective of daily activity patterns that can break down the fluid-film lubrication in vivo and put the wear characteristics of the actual bearing surface material (25). As a consequence, the low bearing wear rates seen in the simulators did not reflect the actual in vivo high wear rates for certain implants that led to high clinical failure rates. The components were also more sensitive to malposition than anticipated.

Manufacturing processes varied amongst different implant designs. The successful metal-on-metal total hip arthroplasties that the metal on metal SRAs were based on were high carbon CoCr alloy manufactured as-cast without any post-casting heat treatment. In attempts to improve mechanical properties and streamline manufacturing, several implant companies introduced post-casting thermal treatments that had the unrecognized effect of leaching carbides out of the alloy, which led to unfavorable wear characteristics. As-cast, high carbon SRA designs i.e., BHR and Conserve Plus have continued to perform well with good survivorship.

Implant specific design features also led to diversity in failure rates amongst the different SRA models. Cup coverage angles were reduced in several designs in an effort to increase impingement free range of motion. However, this had the unintended consequence of increasing propensity for edge loading and wear (26). The DePuy ASR, for example, had a shallower cup than other designs with a coverage angle of compared to the Conserve Plus and the BHR. The higher failure rates reported for the smaller size BHR components was related in part to the lower associated coverage angles and these components were subsequently removed from the market.

Although bone conserving on the femoral side, SRA requires reaming to large cup sizes to accommodate the appropriate femoral shell size. To improve conservation of acetabular bone, some manufacturers made their cups thinner. In hard bone, these thin cups deflected and deformed during insertion, leading to the conversion of polar bearings to equatorial bearings resulting in loss of fluid-film lubrication, seizing and runaway wear. For example, the 50 mm diameter DePuy Pinnacle THA acetabular shell has a thickness of 5.25 mm at the rim, where the ASR only had a thickness of 3.5 mm at the same location.

Diametral clearance between the head and cup similarly varied between designs. Perfect 1:1 congruity between the components leads to equatorial seizing bearing, leading to high friction and wear. Similarly, high clearance designs where there is imperfect congruity between the components can lead to higher wear from imperfect motion and sliding of the ball in the cup. Therefore, the ideal design has a low clearance but not perfect congruity. This allows for a large polar contact area with a small peripheral inlet area where fluid can enter the bearing and provide fluid film lubrication (27). Implants designed with extremely low clearances in attempt to improve wear properties failed at higher rates due to deformation of the cup on insertion leading to total contact or equatorial bearings or manufacturing variabilities that led to some devices with clearances too small to allow adequate fluid film lubrication to occur.

Finally, design features of the individual acetabular or femoral components led to high failure rates in those designs. For instance, the Zimmer Durom acetabular shell failed at an unacceptably high rate due to the peripheral press fit and sharp peripheral fins that prevented contact between the porous plasma sprayed surface of the shell and the prepared host bone (28).

Modern criteria for SRA have been developed based on high failure rates observed in certain populations. The best survivorship is seen in males less than 60 years of age with osteoarthritis and a femoral head component size greater than or equal to 48 mm (29). Most surgeons avoid performing the procedure in women of childbearing age as there remains concerns for systemic absorption of metal ions that can cross the placenta in women who may become pregnant. Women also have a higher revision risk for several reasons (30). First, their hips are on average smaller than males. Smaller component sizes leave a smaller margin for error in component positioning, with each degree of acetabular component malposition leading to a larger increase in edge loading than larger component sizes. Also, the dysplasia and increased femoral and acetabular anteversion increases the risk of component positioning that is prone to edge loading. Additionally, bone quality on average is weaker in women than men, leading to a higher risk of femoral neck fractures postoperatively. Similarly, older age is a risk factor for femoral neck fractures due to osteopenic or osteoporotic bone. Patients with avascular necrosis should be approached with caution as they have a higher risk of femoral neck fracture and femoral component failure from aseptic loosening unless very strict selection criteria are applied (31).

SRA is a technically demanding procedure with is a significant early learning curve of cases associated with a higher incidence of early complications (32,33). Although the anatomy may be familiar, the exposure can be quite challenging for inexperience surgeons. Achieving adequate visualization and access to the acetabulum with the intact femoral head and neck can be difficult. If acetabular exposure is inadequate, bony preparation, full component seating and component position will likely be compromised. Aseptic loosening or edge loading may result. Similarly, delivery of the femoral head out of the wound for preparation of the femoral component can be difficult for a surgeon inexperienced with the releases required for adequate exposure. This may lead to improper sizing of the component, femoral neck notching, perforation, excessive anteversion or retroversion, varus alignment, all of which can increase the risk for femoral neck fracture.

The learning curve for accurate component position may be as long as 50 cases (26,34). Acetabular component position is the single most important factor leading to successful long term outcomes with SRA (35). Excessive anteversion and inclination lead to edge loading and increased wear and must be avoided. Additionally, the cup must be medialized and anteverted enough to avoid anterior overhang of the rim of the cup that may lead to iliopsoas impingement on the sharp edge of the cup.

SRA remains an excellent option for hip reconstruction in patients who wish to return to high levels of activity with demonstrated benefits over THA in this select group. History has taught us that the details of implant design features and manufacturing processes, patient selection and surgeon experience are paramount for achieving successful long-term results. As SRA enters its next generation of implants with non-metal-on-metal bearings, these lessons should be applied to critically evaluate the risks, benefits, techniques and indications for the new designs.