The tumor suppressor genes, tuberous sclerosis complex 1 (TSC1) and TSC2, encode hamartin and tuberin, respectively, which are key upstream negative regulators of the mechanistic target of rapamycin complex 1 (mTORC1) (1-3). Mutations of TSC1 or TSC2 induce abnormal activation of mTORC1 that contributes to the development of the genetic disorder TSC, which is characterized by benign hamartomas in multiple organ systems (4,5). There is also frequent involvement of the skeletal system in TSC such as sclerotic bone lesions with unknown mechanisms. Patients with tuberous sclerosis due to mutation in TSC1/2 present with sclerotic and lytic bone changes (5-9).

mTORC1 signaling has recently emerged as a critical regulator of skeletal growth and bone formation (10-15). Disruption of mTORC1 signaling through deletion of either mTOR or the associated protein raptor diminishes embryonic skeletal growth associated with severe delays in chondrocyte hypertrophy and bone formation (10). We have shown that hyperactivation of mTORC1 via Tsc1 gene deletion in chondrocytes (col2a1-Cre) causes uncontrolled cell proliferation, and blockage of chondrocyte terminal maturation in the growth plate, resulting in chondrodysplasia in mice (14). Moreover, we found that activation of mTORC1 in preosteoblasts (Osx-Cre) by deletion of Tsc1 produced immature woven bone in mice due to excess proliferation but impaired differentiation and maturation of the cells (15). However, the role of TSC in limb and joint development is unknown, and the effects of limb bud mesenchyme cell-specific mTORC1 activation on limb and joint development have not been reported.

In this study, to gain insights into the specific role of TSC1 in limb development, we generated mice with Tsc1 gene deletions in limb bud mesenchyme by crossing Tsc1flox/flox mice with Prx1-cre mice. We found that deletion of TSC1 and activation of mTORC1 in limb bud mesenchyme causes chondrodysplasia and severe knee joint osteoarthritis (OA) in mice. It is suggested that mesenchymal TSC1 is essential for normal limb and joint development and function.

We present the following article in accordance with the ARRIVE reporting checklist (available at http://dx.doi.org/10.21037/aoj-17-21).

Tsc1 floxed mice (Jax #005680) and Prx1-Cre mice (Jax #005584) were purchased from the Jackson Laboratories (Bar Harbor, ME, USA). To generate mice with a limb bud mesenchyme-specific Tsc1 deletion, mice of a Tsc1 floxed line were crossed with Prx1-Cre mice. Mice at different ages were used regardless of gender. We performed genotyping using genomic DNA isolated from tail biopsies, and the primers used were: Prx1-Cre primers (forward 5'-TCCAATTTACTGACCGTACACCAA-3'; reverse 5'-CCTGATCCTGGCAATTCGGCTA-3') and TSC1-loxp primers (forward 5'-GTCACGACCGTAGGAGAAGC-3'; reverse 5'-GAATCAACCCCACAGAGCAT-3') (6). The specificity of recombination was examined by PCR using regions flanking the floxed allele. All experiments were performed in accordance and approved by the Southern Medical University Experimental Animal Welfare and Ethics Committee.

Bone tissues dissected from the mice were fixed using 4% paraformaldehyde in phosphate-buffered saline (PBS) at 4 °C for 24 hours and then decalcified in 15% ethylenediaminetetraacetic acid (EDTA) (pH 7.4) at 4 °C for 14 days. The tissues were embedded in paraffin or optimal cutting temperature (OCT) compound (Sakura Finetec USA, Torrance, CA, USA) and 2–5 µm sagittal-oriented sections were prepared for histologic analyses using hematoxylin and eosin (H&E) and safranin O/fast green staining. For IHC, we incubated sections with primary antibodies which recognized mouse phosphor-S6 ribosomal protein (Ser235/236) (1:1,000 for WB; 1:100 for IHC, CST, #2211) at 4 °C overnight. All sections were observed and photographed on an Olympus BX51 microscope (Tokyo, Japan).

Quantitative analysis was performed in mice femora at 20 µm resolution on a micro-CT Scanner (Scanco Medical, Bassersdorf, Switzerland). Briefly, scanning was performed from the lower growth plate of each femur and extended proximally for 300 slices. We began morphometric analysis with the first slice in which the femoral condyles were fully merged and extended for 100 slices proximally. The three-dimensional (3D) structure and morphometry were constructed and analyzed for bone volume/total volume (BV/TV), bone mineral density (BMD) (mg HA/mm3), trabecular number (Tb.N) (mm−1), trabecular thickness (Tb.Th) (mm) and trabecular spacing (Tb.Sp) (mm).

All results are expressed as mean ± SEM. Student’s t-tests were used to calculate P values Statistical significance was defined as P<0.05.

Generation of mice with TSC1 deletion in limb bud mesenchyme

We first generated conditional knockout mice with TSC1 deletion limited to the limb bud mesenchymal cells by crossing floxed Tsc1 mice with Prx1-Cre mice. We selected Prx1-creTG/+;Tsc1flox/flox (hereafter referred to as TSC1KO) mice and Prx1-CreTG/+;TSC1+/+ (hereafter referred to as CONTROL) for detailed analysis. The deleted allele was amplified by PCR from tissue samples of TSC1KO and CONTROL mice (Figure 1A). Immunohistochemical staining of distal femur sections showed a dramatic increase in P-S6 (S235/236) in 8-week-old TSC1KO mice. Specific enhancement of P-S6 (S235/236) in chondrocytes from the proliferation and hypertrophic zones (PZ and HZ) was observed in the growth plate of TSC1KO mice (Figure 1B). To examine the recombination in osteoblasts, osteoblasts were obtained from newborn TSC1KO mice and their littermate controls. Western blotting analysis demonstrated the efficient deletion of TSC1 in osteoblasts with activating P-S6 (S235/236) (Figure 1C). These results indicated that the Tsc1 gene had been specifically deleted in mesenchymal cells, chondrocytes and osteoblasts in the limbs of TSC1KO mice. 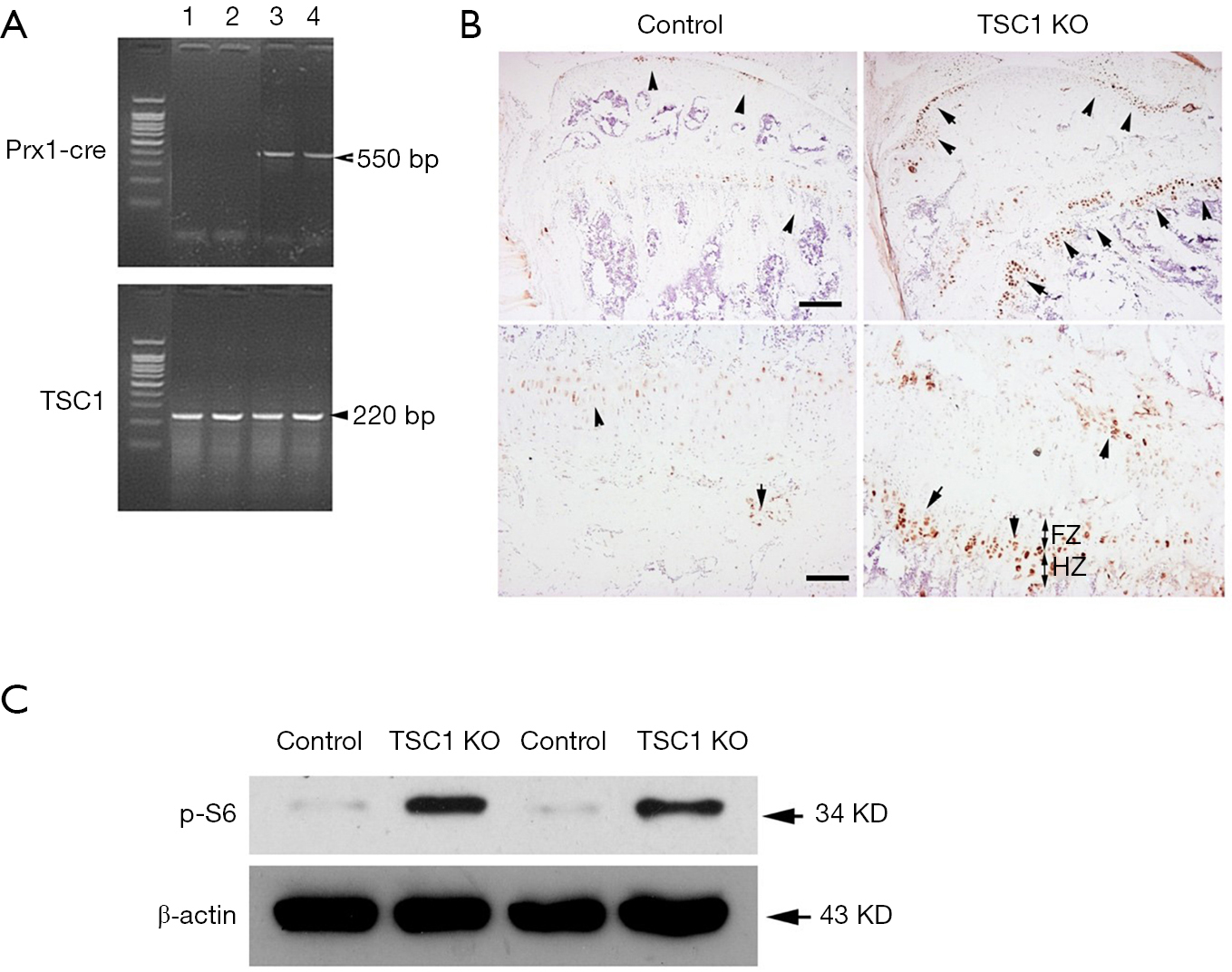 Deletion of TSC1 in limb mesenchyme results in dwarfism in mice

Although TSC1KO mice were born at normal Mendelian ratios and showed no differences in body length or weight at birth compared with their littermates, they displayed progressive delays in limb length and body weight gain. We calculated the weight and length of the TSC1KO mice at 4 months, and found that the length was significantly decreased compared with control mice, and body weight was also markedly reduced in the TSC1KO group (Figure 2A). The femora and tibiae of TSC1KO mice were much shorter than those of control mice (Figure 2B,C). These results demonstrate that loss of TSC1 limits limb development and causes dwarfism in mice. 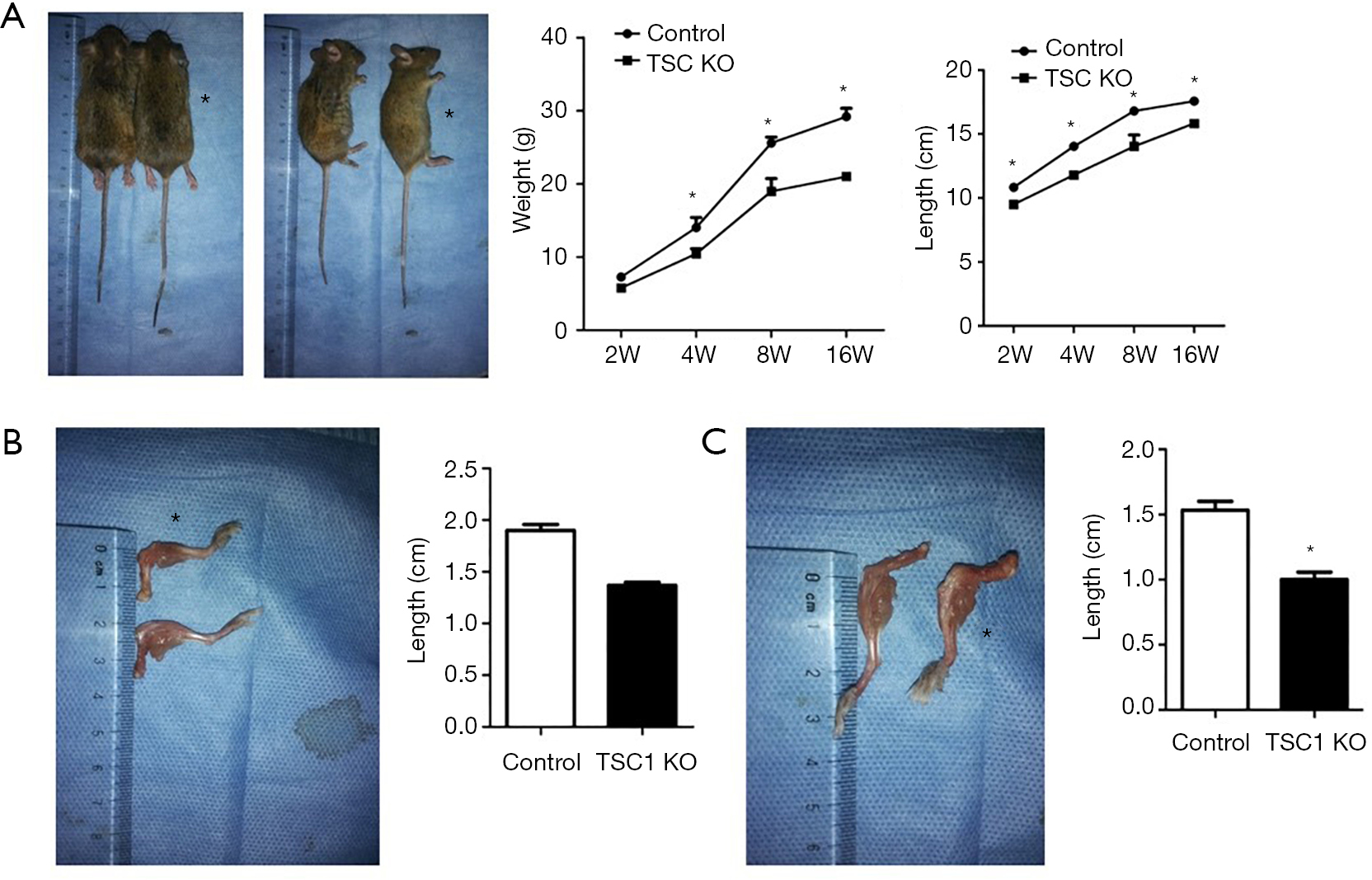 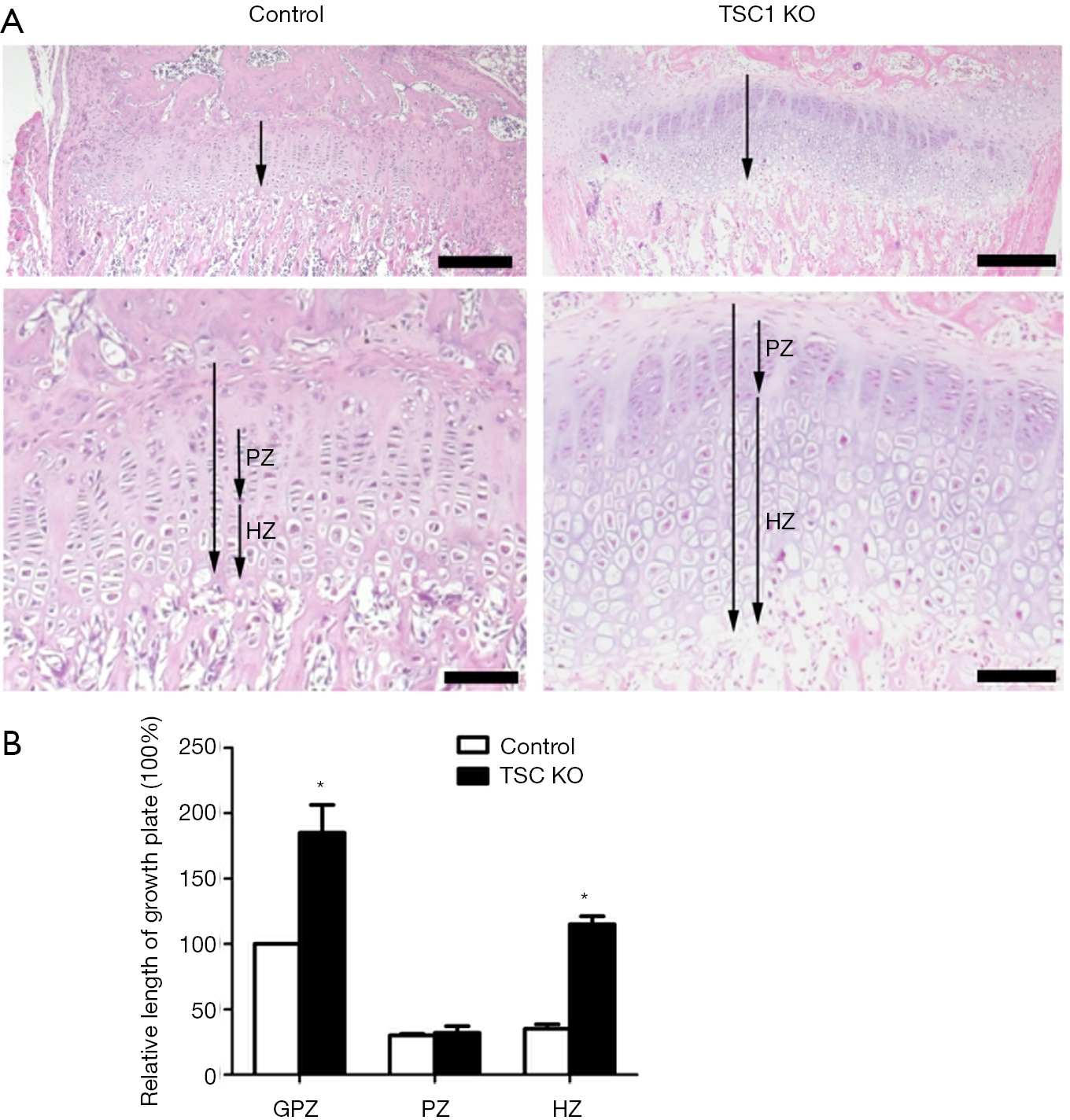 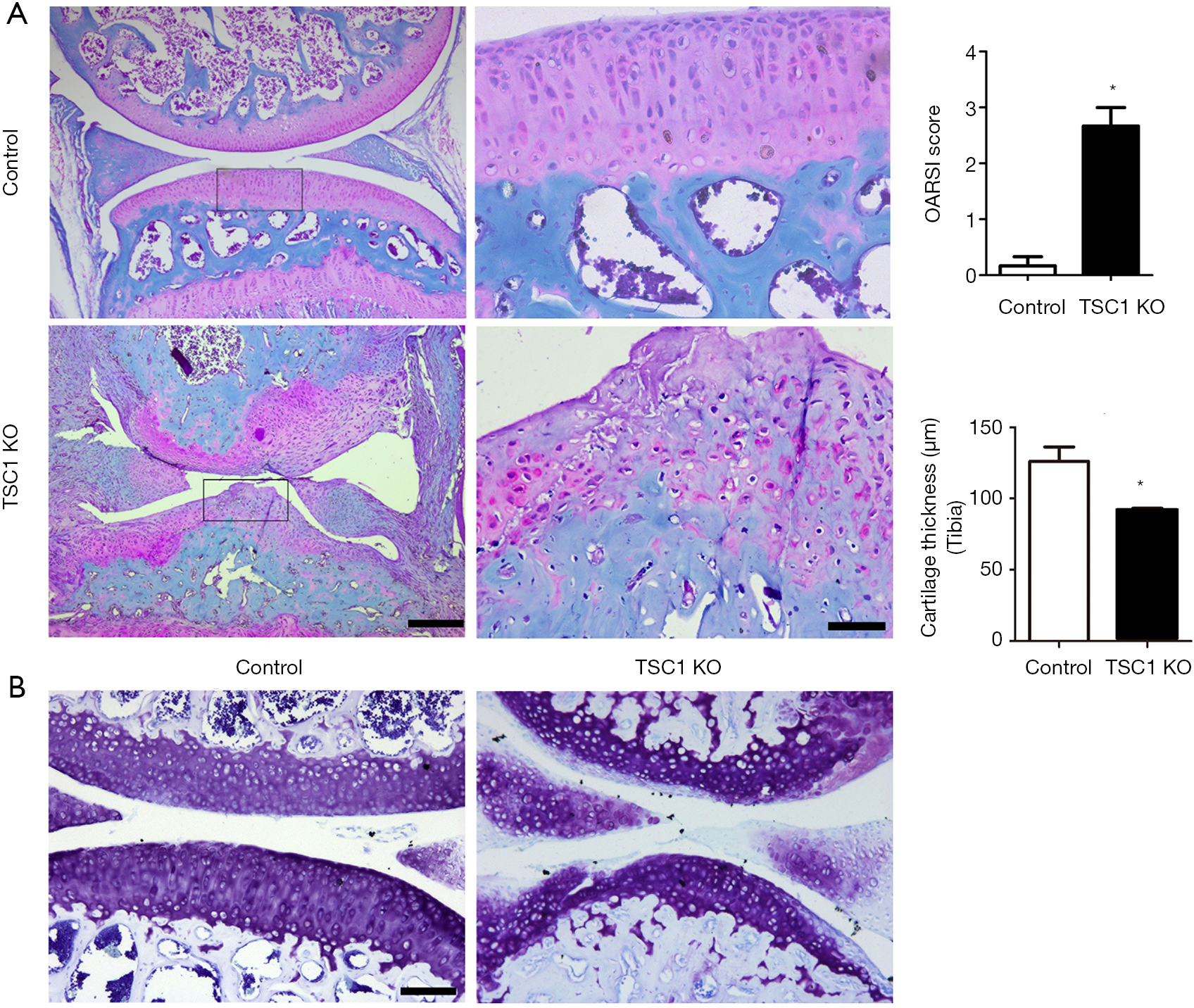 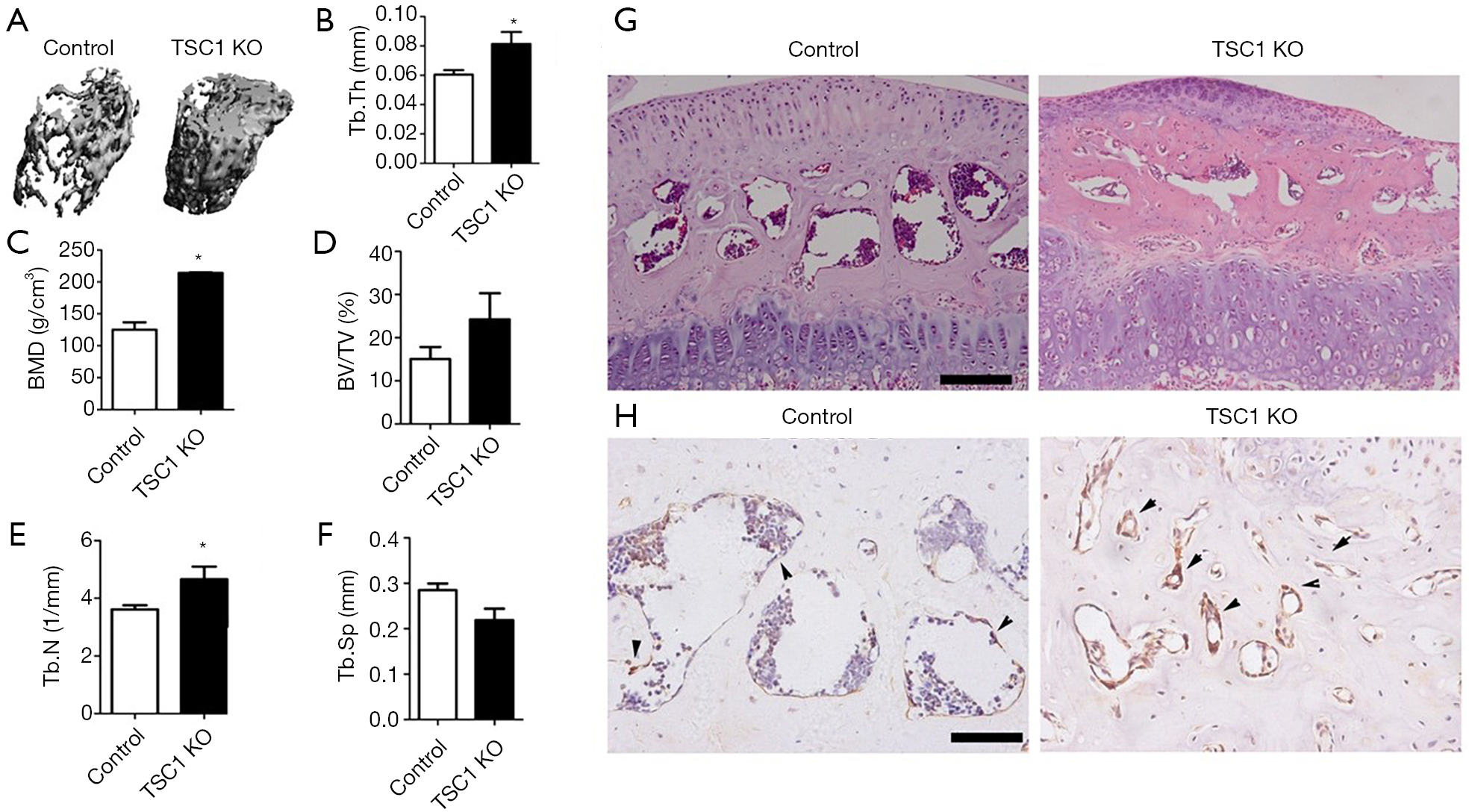 The appendicular skeleton of mammals is derived from cartilage templates through endochondral ossification (19). The process begins with condensation of mesenchymal cells within the embryonic limb bud. Subsequently, cells at the core of the mesenchymal condensation differentiate into chondrocytes, which secrete cartilage matrix rich in type II collagen and proteoglycans. Endochondral bone formation depends on a highly coordinated program of proliferation, differentiation and maturation through permanent withdrawal from the cell cycle, hypertrophy and terminal differentiation of chondrocytes within the mammalian growth plate (20-22). Disruption of this program results in chondrodysplasia or a malformed skeleton (21). However, relatively little is known about the intracellular signaling mechanisms responsible for the coordination and transitions involved.

We have recently demonstrated that normal and precisely-controlled mTORC1 activity is essential to coordinate chondrocyte growth, proliferation and differentiation during endochondral bone formation. Hyper-activation of mTORC1 via Tsc1 gene deletion in chondrocytes (Col2a1-Cre) causes uncoupling of the normal proliferation and differentiation program within the growth plate, resulting in uncontrolled cell proliferation, blockage of differentiation, and chondrodysplasia in mice (14). Another study by Chen et al. showed that inactivation of mTORC1 through deletion of either mTOR or the associated protein raptor diminishes embryonic skeletal growth due to a reduction in chondrocyte cell size and the amount of cartilage matrix, resulting in a subsequent severe delay in chondrocyte hypertrophy and bone formation (10). However, the role of TSC1 in limb bud mesenchymal cells and limb development is unclear. Prx1 is one of the earliest genes that are expressed in the mesenchyme of the prospective limb-forming region in mouse embryos (23). We therefore deleted the Tsc1 gene with Prx1-Cre, which targets mainly the limb, the cranial and the interlimb flanking mesenchyme (23). We found that deletion of TSC1 in limb mesenchymal cells causes expansion of chondrocytes and the growth plate, resulting in chondrodysplasia and dwarfism in the knockout mice. Thus, our data suggest that limb bud mesenchymal TSC1 is essential for normal limb development.

The other critical phenotype of the TSC1KO mice is spontaneous and severe knee joint OA. Several recent studies have demonstrated that mTORC1 may play a vital role in chondrocyte metabolism and OA pathophysiology (24). Both cartilage-specific deletion of mTOR and pharmacological inhibition of mTORC1 have been shown to reduce the severity of experimental OA in a mouse model (25,26). We recently showed that mice with ablation of Tsc1 in chondrocytes (col2a1-Cre) also exhibited spontaneous OA, with aberrant chondrocyte proliferation and hypertrophic differentiation (27). This was partially associated with dramatic downregulation of fibroblast growth factor receptor 3 (FGFR3) and parathyroid hormone (PTH)/PTH-related protein (PTHrP) receptor (PPR), two receptors critical for preventing chondrocyte proliferation and differentiation (27). Interestingly, the severity of knee joint OA in Tsc1-Prx1-Cre mice is far more serious than that in Tsc1-col2a1-Cre mice (Figure 4) (27). This difference may result from ablation of TSC1 in cells at an earlier stage (mesenchymal stem cells), since Tsc1-Prx1-Cre interferes with normal knee joint development and causes disorganization of articular cartilage chondrocytes and malformation of the knee joints, while deletion of TSC1 in osteoblasts Tsc1-Prx1-Cre stimulates aberrant osteoblastic bone formation and induces disorganization of the subchondral bone and increased bone mass.

In summary, this study demonstrates that deletion of TSC1 and activation of mTORC1 in limb bud mesenchyme causes chondrodysplasia and severe knee joint OA in mice, implying that mesenchymal TSC1 is essential for normal limb and joint development and function.

Reporting Checklist: The authors have completed the ARRIVE reporting checklist. Available at http://dx.doi.org/10.21037/aoj-17-21

Conflicts of Interest: All authors have completed the ICMJE uniform disclosure form (available at http://dx.doi.org/10.21037/aoj-17-21). The authors have no conflicts of interest to declare.

Ethical Statement: The authors are accountable for all aspects of the work in ensuring that questions related to the accuracy or integrity of any part of the work are appropriately investigated and resolved. All experiments were performed in accordance and approved by the Southern Medical University Experimental Animal Welfare and Ethics Committee (No. K2018018).