Acute pancreatitis due to pancreatic metastasis of osteosarcoma: a report of two cases

A 47-year-old woman was referred to our hospital due to left femur pain. A diagnosis of osteosarcoma of the distal femur was made with open biopsy. Wide tumor resection and reconstruction with endoprosthesis were performed. The pathological findings at surgery showed high-grade osteosarcoma, and she was treated with adjuvant chemotherapy using doxorubicin and ifosfamide postoperatively. However, 1 year and 4 months after initial treatment, the patient experienced lower back pain, and bone metastases were found in the twelfth thoracic vertebral body. A chest CT scan showed that she also had multiple lung metastases. Chemotherapy using gemcitabine and docetaxel was performed, followed by carbon ion radiotherapy for the twelfth thoracic vertebral body. However, the patient still felt back pain 2 years postoperatively. An abdominal CT showed a 7 cm mass in the pancreatic head (Figure 1). Laboratory examination showed increased level of amylase (340 U/L). Considering that the acute pancreatitis due to pancreatic metastasis, palliative radiotherapy (30 Gy/10 fractions) was performed. Although abdominal pain was improved, she had died of multiple metastasis after 2 months. 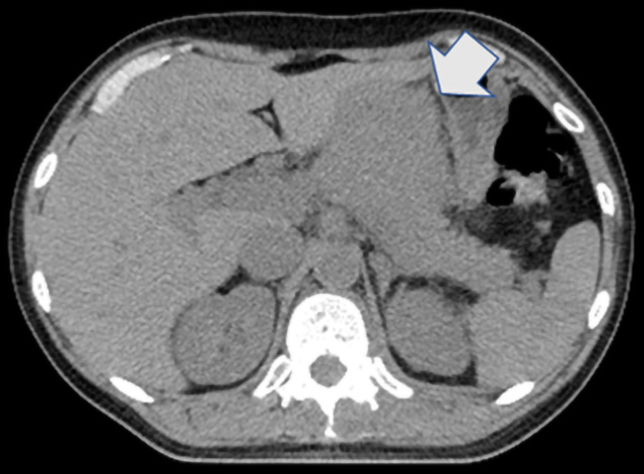 A 42-year-old woman presented with left knee pain. After X-ray and MRI were performed in the clinic, she was referred to our hospital. A diagnosis of high-grade osteosarcoma was confirmed by open biopsy at the distal part of the femur. She was treated with three cycles of neo-adjuvant chemotherapy using doxorubicin and ifosfamide, followed by wide tumor resection and distal femur replacement. Although postoperative adjuvant chemotherapy was administered, she developed lung metastases 3 months after the initial treatment. Radiofrequency ablation was performed for the multiple lung metastases. However, she felt abdominal and back pain 6 months after initial treatment. CT scans showed a large mass in the pancreatic tail (Figure 2). The mass increased rapidly over a short duration and complicated the acute pancreatitis. The patient’s levels of amylase were also elevated (200 U/L). Palliative radiotherapy (30 Gy/10 fractions) was performed. After 1 month, the patient died of lung metastases. 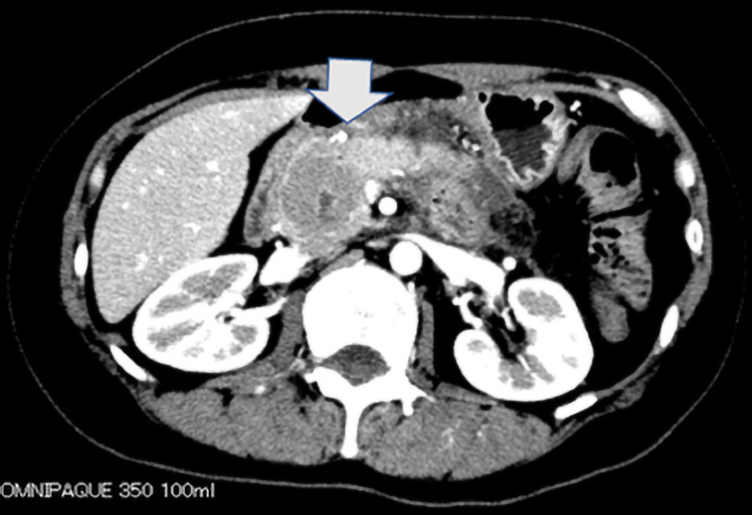 Metastases to the pancreas have various symptoms, such as jaundice, abdominal and back pain, vomiting, and nausea. However, some patients are asymptomatic. Metastases are found during regular follow-up examinations for their primary disease (3,11-13). In the present cases, the patients had severe abdominal pain, elevated levels of amylase, and pancreatic metastases combined with acute pancreatitis as diagnosed with CT scans.

The prognosis after pancreatic metastasis is generally poor, because patients will in most cases develop multiple metastases. In previous reports, data related to patient outcomes was limited due to a quite short follow-up. Although there is no evidence that resection for pancreatic metastasis in osteosarcoma is superior to an alternative, surgical management was reported to be effective in patients with renal cell carcinoma (17). If metastasis can be controlled in patients with osteosarcoma, surgery and/or chemotherapy may be indicated.

Acute pancreatitis due to pancreatic metastasis has been reported as MIAP (18). Most cases of MIAP were diagnosed clinically, because tissue diagnosis may be difficult in MIAP due to poor performance status of the patients (19). MIAP is quite rare, with Stewart et al. reporting only one patient diagnosed with MIAP out of 802 lung cancer patients. They also suggested that treatment for pancreatitis should be first considered, and once the pancreatitis is alleviated, treatment for the metastatic disease can be performed (19). In the present cases, palliative radiotherapy was performed, because the patients developed multiple metastases and no further treatment was planned. In previous reports, all patients with pancreatic metastases developed metastases at other sites, such as the lungs and bone. Therefore, we suggest that follow-up examinations at the abdominal lesion may be necessary for patients with metastatic disease.

Ethical Statement: The authors are accountable for all aspects of the work in ensuring that questions related to the accuracy or integrity of any part of the work are appropriately investigated and resolved. We obtained written informed consent from patients for present report when they received surgery.