Osteosarcoma is the most common malignant primary tumor of bone and mainly occurs in young generations (1,2). Approximately 800 new cases of osteosarcoma are diagnosed in the United States each year (American Cancer Society, Cancer Facts & Figures 2019. Atlanta, Ga. American Cancer Society; 2019). Advances in multimodal therapy have improved the survival rates by more than 65% for patients with localized osteosarcoma (1). First-line treatment of osteosarcoma includes surgery, chemotherapy, and radiotherapy (3,4). Cisplatinum (CDDP), doxorubicin (DOX), ifosfamide (IFO) and high-dose methotrexate (MTX) are used in combination for osteosarcoma treatment (1,3-5). Resistance to these chemotherapeutics often develops, leading to a recurrence of the disease which is frequently fatal to the patient (6,7). The 5-year survival is only 39% after developing local recurrence and 19% after developing lung metastasis (7). Due to such unsatisfactory outcomes, novel precision therapy is necessary.

Toward the goal of precision oncology in osteosarcoma, our laboratory has developed the patient-derived orthotopic xenograft (PDOX) model of cancer including osteosarcoma using the technique of surgical orthotopic implantation (SOI) (8-11). Discrepancies have often been described between the abilities of invasion and metastasis of the tumors in patients compared to their benign behavior in subcutaneously-transplanted xenografts [patient-derived xenograft (PDX)] (12). SOI of intact tumor tissue can cause metastasis that mimics clinical metastasis (10,12-16). A clinical study of twenty-patients with stomach cancers that grew orthotopically in nude mice demonstrated direct correlation of the metastatic pattern of the patient and mice (16). In another study, a lung metastasis tissue derived from a colon cancer patient grew in the lung, but the tumor did not grow in the nude mice’s colon or skin showing exquisite tissue targeting of the metastatic tumors (17). Thus, the PDOX models recapitulate human tumors better than PDX models (12). Metastasis is observed to a greater extent in PDOX models due to the intact histology and correct-organ tumor micro-environment (TME) of the orthotopically implanted tissue (10,13,14). Our laboratory has established PDOX models from patients with major cancers such as breast (18), colon (19), lung (20), ovarian (21), and pancreatic cancer (22) in the 1990s, resulting in the growth of primary and metastatic tumors very similar to that of patient. Recently, PDOX models of melanoma (9) as well as sarcoma (23) and cervical cancer (13,24) have been developed.

The present report reviews our research group’s experience with osteosarcoma-PDOX models, and the power of the PDOX models to identify effective chemotherapies or experimental therapeutics.

Initial experience of an osteosarcoma-PDOX was with a tumor from a 16-year-old patient presenting localized osteosarcoma of the distal femur. Cisplatinum (CDDP)-based chemotherapy and endoprosthesis reconstruction was performed (11). Lung metastases were found one year after the surgery. The patient did not receive any chemotherapy before metastasectomy of the lung. A fresh surgical specimen from the patient contained in cell-culture medium was transported to our laboratory on wet ice. The tumor tissue was cut into small fragments and implanted subcutaneously in nude mice (Figure 1A). Subcutaneously-grown tumors were harvested and cut into 3–4 mm fragments (Figure 1B). The vastus lateralis muscle and the biceps femoris muscle of the nude mouse was split to reach the distal femur (Figure 1C). Next, the lateral patello-femoral ligament was incised and resection of the lateral condyle of the femur was performed (Figure 1D). A single tumor fragment was implanted orthotopically into the space created by the lateral condyle resection and an osteosarcoma-PDOX model was thus established (Figure 1E). The untreated PDOX tumor (Figure 2A) was a chondroblastic osteosarcoma histologically similar to the tumor of the original patient (Figure 2B) filled with atypical spindle cells displaying mitosis and nuclear pleomorphism (26). 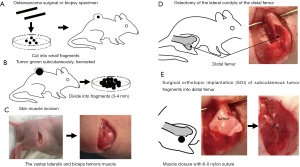 Figure 1 Schematic illustration of surgical orthotopic implantation (SOI) for establishment of the osteosarcoma-PDOX model. (A) Osteosarcoma surgical or biopsy specimens were previously obtained from the patient. The specimens were cut into small fragments and implanted in nude mice subcutaneously for tumor stock; (B) after growth in nude mice, the tumor were harvested and divided into the fragments; (C) a skin incision was made on the right thigh. The vastus lateralis muscle and biceps femoris muscle were split to reach the distal femur (dotted line); (D) the lateral condyle of the distal femur was resected; (E) a single tumor fragment was implanted orthotopically into the space. The muscle was closed with a 6-0 nylon suture. The tumor fragment was totally covered by the muscle. Modified after (11,25). PDOX, patient-derived orthotopic xenograft.

PDOX from the 16-year-old patient with chondroblastic femoral osteosarcoma

The patient had developed distant metastases after CDDP treatment, indicating CDDP resistance. When CDDP was administered to the established osteosarcoma-PDOX model, tumor growth was not inhibited compared to that of control, reflecting the clinical results (26). We found that temozolomide (TEM), an oral alkylating agent used in some brain cancers treatment, and trabectedin (TRAB), an isoquinoline alkylating agent approved for soft-tissue sarcoma treatment, showed strong efficacy causing extensive necrosis on the CDDP-resistant osteosarcoma-PDOX model (11). Later we demonstrated that adding irinotecan (IRT), an inhibitor of topoisomerase-1, to TEM regressed this CDDP-resistant relapsed metastatic osteosarcoma-PDOX tumor, thereby identifying the novel combination treatment for recalcitrant osteosarcoma (27). In addition, we found that eribulin, an inhibitor of microtubule dynamics approved only for breast cancer and soft-tissue sarcoma arrested this osteosarcoma-PDOX tumor growth, whereas the first-line drug DOX, as well as a multi-targeted receptor tyrosine kinase inhibitor sunitinib or pazopanib were ineffective on the osteosarcoma-PDOX (28).

PDOX from a 14-year-old patient with conventional pelvic osteosarcoma

A fresh biopsy tissue of a 14-year-old patient with osteosarcoma of the pelvis was obtained and cut into small fragments which were subcutaneously implanted into nude mice (29). No chemotherapy or radiotherapy was given to the patient before the biopsy. Harvesting of subcutaneous-implanted tumors, fragmentation, and implantation into the mouse’s distal femur, and wound closure to establish an osteosarcoma-PDOX model, were performed as mentioned above. We screened many chemotherapy drugs, including traditional chemotherapeutics and molecular targeting drugs, but they were ineffective when they were administrated alone against this recalcitrant osteosarcoma-PDOX model. This osteosarcoma-PDOX was resistant to both CDDP and DOX, both of which are first-line drugs for osteosarcoma, with no histological response observed (29,30). In addition, monotherapy of several molecular targeting drugs including IRT, TRAB, sorafenib (SFN), an inhibitor of several tyrosine protein kinases, palbociclib (PAL), a cyclin-dependent kinase 4/6 (CDK4/6) inhibitor, everolimus (EVL), the mammalian target of rapamycin (mTORC1)-specific inhibitor, and olaratumab (OLA), an anti-platelet-derived growth factor receptor alpha (PDGFRα) human monoclonal antibody, were ineffective on this PDOX model (25,29-31). However, we found that combination treatments using these drugs could overcome CDDP- or DOX-resistance of the osteosarcoma-PDOX. The IRT and TRAB combination, whose strong synergism has been studied only in ovarian cancer, Ewing’s sarcoma, and rhabdomyosarcoma regressed the osteosarcoma-PDOX tumor and caused extensive necrosis in tissue-sections with significantly decreased Ki-67 positive cancer cells (29). An SFN and PAL combination, which was investigated only in hepatocellular carcinoma and pancreatic carcinoma, regressed the osteosarcoma-PDOX tumor with extensive necrosis (31). An SFN and EVL combination, which showed synergistic interaction on several cancers such as renal, hepatic, and pancreatic cancers, resulted in significant tumor growth inhibition of this osteosarcoma-PDOX (30). A combination of OLA and DOX, which has been approved for soft-tissue sarcoma treatment, was partially effective to the osteosarcoma-PDOX model (Figure 3) (25). To our surprise, the combination of OLA, CDDP, and DOX regressed the osteosarcoma-PDOX with extensive tumor necrosis and reduced Ki-67 positive cells (Figure 3) (25). Pioglitazone (PIO), a thiazolidinedione class of anti-diabetic drugs, is a synthetic selevtive agonist of peroxisome proliferator-activated receptor gamma (PPARγ) (32). Activating PPARγ can increase sensitivity of some chemotherapy drugs and reverse the chemoresistance of cancers by several mechanisms (33,34). We reported that the osteosarcoma-PDOX tumor growth was significantly inhibited when PIO was added to CDDP, to which it was insensitive as monotherapy (35). In addition, we demonstrated that PIO could block DOX-induced P-glycoprotein (P-gp), an energy-dependent transmembrane drug efflux pump which has a key role in multidrug resistance, in the 143B osteosarcoma cell lines and reverse DOX-resistance of osteosarcoma-PDOX models (36). 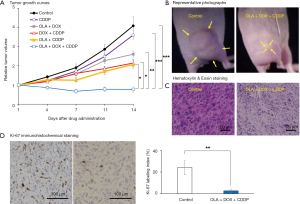 Identification of experimental therapeutics for patients

PDOX from the 16-year-old patient with chondroblastic femoral osteosarcoma

Our laboratory developed tumor-targeting Salmonella typhimurium A1-R (S. typhimurium A1-R) which was effective for primary and metastatic tumors in major in cancers nude mouse models as monotherapy (37). We demonstrated that intra-arterial (i.a.) administration of S. typhimurium A1-R significantly regressed an osteosarcoma-PDOX tumor compared with untreated or intra-venous (i.v.)-treated PDOX tumors (26). Cancer cells are highly addicted to methionine (MET) and their need for MET is restricted by a recombinant methioninase (rMETase), a cloned enzyme of Pseudomonas putida (38). The efficacy of rMETase was demonstrated on PDOX models of various chemoresistant-cancers (39). We have established an osteosarcoma lung metastasis PDOX model by SOI to the mouse lung to identify effective strategy for metastatic osteosarcoma (40). This osteosarcoma lung-metastasis PDOX was MET-dependent since it responded to rMETase and the combination of S. typhimurium A1-R cell-cycle decoy, rMETase cell-cycle trap, and CDDP kill could eradicate the PDOX tumor (40).

PDOX from a 14-year-old patient with conventional pelvic osteosarcoma

We have demonstrated that oral administration of rMETase (o-rMETase) significantly decreased the plasma MET concentration and tumor growth more than intraperitoneal administration of rMETase (41). Caffeine (CAF) enhances the efficacy of certain anti-cancer drugs by overcoming drug-induced cell-cycle arrest and increasing subsequent cancer-cell apoptosis (42). CAF increased the sensitivity of cancer cells arrested by o-rMETase by inducing mitotic catastrophe (43). A combination of oral CAF and o-rMETase significantly inhibited the osteosarcoma-PDOX growth (Figure 4) (44). Furthermore, CDDP-resistance of the osteosarcoma-PDOX was overcome and the tumor regressed when this combination was added to CDDP (Figure 4) (44). Azacitidine (AZA), an inhibitor of DNA methyltransferase, causes DNA hypomethylation (45). rMETase itself can inhibit DNA methylation and can synergistically enhance the DNA hypomethylating effect of AZA (38,39,46). We showed that the o-rMETase and AZA combination arrested osteosarcoma-PDOX growth and significantly decreased Ki-67 positive cells, demonstrating that strong cancer-cell growth inhibition of the combination (46).

Message to the reader

Osteosarcoma is a rare group of cancers. CDDP, DOX, MTX, and IFO are still first line chemotherapy after many decades (1,3). Resistance to these drugs or recurrence after treatment is commonly seen which results in unsatisfactory outcomes (6,7). Although, many systemic treatments such as molecular-targeted drug and immunotherapy have been developed for major cancers, clinical trials trying to evaluate these novel treatment have been limited in osteosarcoma. Discovering novel effective treatment for each osteosarcoma patient with precision oncology is warranted.

To achieve the goal of precision medicine for osteosarcoma, we have reported 13 studies of osteosarcoma-PDOX models using clinically-used as well as experimental agents since 2017 (Table 1). The osteosarcoma-PDOX models present an opportunity to examine multiple therapeutics considered to be active, including molecular targeted therapy, and experimental therapy such as tumor-targeting S. typhimurium A1-R and rMETase, as well as the combinations of these therapeutics in preclinical models. The patient does not need to suffer from the potential drug toxicity and morbidity of ineffective chemotherapies. In an era of growing promise of new treatment and precision medicine, PDOX models can offer a unique opportunity to provide specific and individualized therapy and novel therapeutic options for osteosarcoma patients. 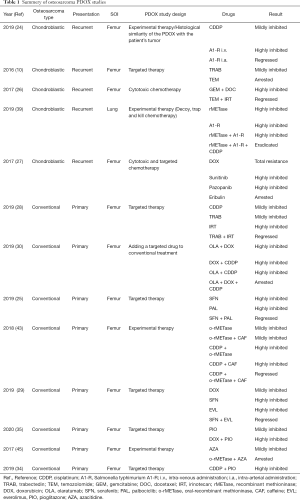 Conflicts of Interest: All authors have completed the ICMJE uniform disclosure form (available at http://dx.doi.org/10.21037/aoj.2020.02.08). The authors have no conflicts of interest to declare.