Proximal humerus fractures (PHFs) are a common source of morbidity in patients, especially in the elderly population. It is the third most common fracture diagnosed in elderly patients after hip and distal forearm fractures (1). PHFs most commonly occur from a low energy mechanism such as a fall from standing height. These fractures are more common in females (84%) and elderly patients with an average age of 71 years (2). While extremely common, up to 84% of PHFs are treated conservatively without surgery (3). The proportion of PHF being treated conservatively has remained relatively unchanged in the past decade. In that same timeframe, open reduction and internal fixation (ORIF) was the most common type of surgery for PHFs. Shoulder replacement procedures are another surgical option, with recent emphasis on reverse shoulder arthroplasty (RSA), which has largely replaced hemiarthroplasty (HA) (4).

Surgery has traditionally been reserved for displaced two, three, and four-part PHFs based on the classic Neer criteria (5). Although the rate at which PHFs are being treated with surgery has not changed, there has been recent literature supporting non-operative treatment in displaced PHFs. The Proximal Fracture of the Humerus Evaluation by Randomization (PROFHER) study was a multi-center randomized study conducted in the United Kingdom comparing surgical and non-surgical treatment in 250 patients with displaced surgical neck fractures of the proximal humerus. The study found no difference in function outcomes, quality of life scores, complication rates, or mortality at two and five years post-injury (6,7). Furthermore, two recent Cochrane systematic review showed no evidence of improved functional or quality of life scores in operatively treated displaced PHFs (8,9).

A uniform protocol for suggested non-operative treatment of PHFs does not currently exist. A wide range of timeframes for immobilization exist. The duration, frequency, and type of physical therapy also varies significantly in the literature. When assessing the type of immobilization used, most commonly it is a routine sling with the arm resting in an internally rotated position. The potential exists for malreduction of the PHF from remaining in this position. In this article, we introduce the concept of immobilization of PHFs in neutral rotation. Furthermore, we offer a comprehensive review of non-operative protocols used in the literature, and propose a standardized protocol for non-operative treatment of these injuries. 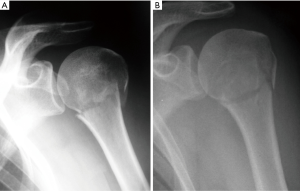 Figure 1 AP radiographs of a surgical neck type PHF. The arm held in a standard sling (A) demonstrates fracture malalignment compared to the arm in a neutral rotation immobilizer (B). 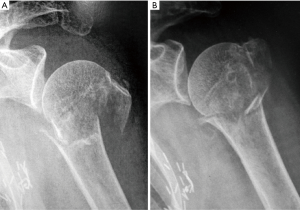 The theory that maintaining the arm a neutral rotation would better align PHFs was examined with a cadaveric model (Figure 3). The cadaveric specimens were dissected down to the intact rotator cuff. In the first specimen, one pin was driven into the humeral head and one in the humeral shaft. A surgical neck osteotomy was then performed to simulate a surgical neck fracture. As seen in Figure 3A, when the arm is held in internal rotation, the fracture displaces due to the rotator cuff maintaining the humeral head in a neutral orientation. When the arm is held in neutral rotation the fracture is well reduced. A greater tuberosity osteotomy was performed on another specimen, simulating an isolated greater tuberosity fracture. With the arm internally rotated, the fracture displaces posteriorly and with the arm in neutral the fracture is well reduced (Figure 3B). Fracture displacement also occurs with an isolated greater tuberosity osteotomy on a cadaveric model as shown in Figure 4. While a cadaveric specimen cannot account for the dynamic forces experienced in the shoulder, PHFs appear to maintain a more anatomic fracture alignment when the arm is held in a neutral rotation as opposed to internal rotation. 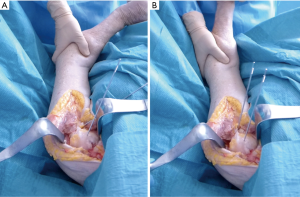 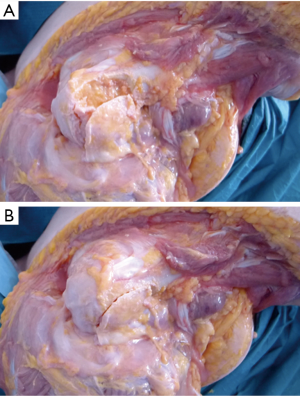 Figure 4 A cadaveric specimen with a greater tuberosity osteotomy shows fragment displacement with the arm in internal rotation (A) when compared to neutral rotation (B). 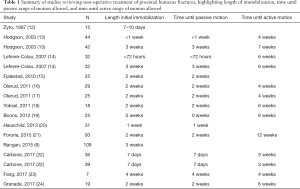 The literature demonstrates variability in rehabilitation protocols for non-operatively treated PHFs. Most protocols entail a period of immobilization followed sequentially by passive range of motion exercises, active range of motion exercises, and finally strengthening exercises. Home exercise programs have been shown to be as effective as formal physical therapy when performed correctly (25). Most providers agree that a structured early rehabilitation program produces better results as has been shown in the literature (8).

A consensus on treatment protocol for non-operatively treated PHFs does not exist. The routine placement of PHFs in a standard sling keeps the humeral shaft internally rotated relative to the humeral head, causing potential displacement and malunion of the fracture. We propose that PHFs treated without surgery be placed in a neutral rotation shoulder immobilizer at the time of injury. We also encourage a standard rehabilitation protocol that includes pendulum and gentle range of motion exercises for the first two weeks after the injury. This is followed by two weeks of passive range of motion exercises, then two weeks of active range of motion exercises, and progression to full activity without restrictions at six weeks. A randomized controlled trial comparing results in patients with a standard sling and patients in a neutral shoulder immobilizer is necessary to further evaluate this proposal.

Provenance and Peer Review: This article was commissioned by the editorial office, Annals of Joint for the series “Management of Fractures Around the Shoulder”. The article has undergone external peer review.