Multiple ligament injuries of the knee usually occur after high-velocity trauma, with the posterolateral structures being the most commonly injured. Of patients with posterior cruciate ligament (PCL) injuries, 60–72% have been estimated to also a concomitant injury to one or more posterolateral structures (1-7). In addition, there is also a high prevalence of associated posteromedial injuries (1,2). In the multiligamentous-injured knee, untreated posteromedial instability can often be the cause of failure of an isolated PCL reconstruction (8). Current literature supports the reconstruction of high-grade medial-sided injuries (1,3,8-10). When simultaneous reconstruction of the PCL and posterior oblique ligament (POL) is necessary, tibial tunnel intersection is a serious concern, and its avoidance can be a technically challenging endeavor. Additionally, violating the patellar tendon by the exit point of the POL tunnel is a concern when selecting the appropriate tunnel trajectory. This study aims to validate the optimal angle of direction for the POL tunnel to avoid PCL tunnel intersection and patellar tendon violation during a combined POL/PCL reconstruction on the basis of previous study.

The study was conducted in accordance with the Declaration of Helsinki (as revised in 2013). The study was approved by Experimental Research Institute of Nanjing University of Chinese Medicine (No. A170609).

We scanned two pairs and a single cadaveric lower leg utilizing a 3DSS Mirage 4 Eyes 3D scanner (Shanghai Digital Manufacturing Co., Ltd., Shanghai, China) and obtained five 3-dimensional images of the tibia and fibula. We then simulated two separate techniques for positioning the PCL insertion. The first method positioned the center of the PCL tunnel at the center of the native PCL fovea. The second method positioned the PCL tunnel within the posterior half of the PCL fovea (Figure 1A). The angle between the PCL tunnel and the joint line was set to 50° (Figure 1B), and the diameter of the PCL tunnel was fixed at 10 mm (Figure 1C). The POL tibial tunnel was then placed on the posteromedial aspect of the tibial plateau, approximately 15 mm below the joint line, just proximal to the insertion of the semimembranosus muscle (Figure 2A,B). Two different configurations of this tunnel were simulated. The first was a standard 6-mm cylindrical tunnel (Figure 3A). The other tunnel configuration was created with a wider diameter medially. This was accomplished by reaming from posteromedial to anterolateral at a diameter of 6 mm and a depth of 23 mm, and then reaming at a 4.5-mm diameter for the remainder of the tunnel length (Figure 3B). The angle created between these POL tunnel(s) and a coronal plane tangential to the posterior tibial condyles were then analyzed and identified (Figure 4A) with Solidworks (R) Premium 2013 X64 (DS SolidWorks, Concord, Massachusetts, USA). Utilizing this model, we then observed the relationship between the POL tunnel entry and exit points and the PCL tunnel, Gerdy’s tubercle, and the patellar tendon (Figure 4B). We then noted the angle(s) of trajectory at which the POL tunnel intersected the PCL tunnel and the patellar tendon.

Figure 2 The center of POL osseous tunnel was placed in the posteromedial aspect of the tibial plateau approximately 15 mm below the joint line (A) just proximal to the insertion of the semimembranosus (B). Red point: POL osseous insert point. POL, posterior oblique ligament. 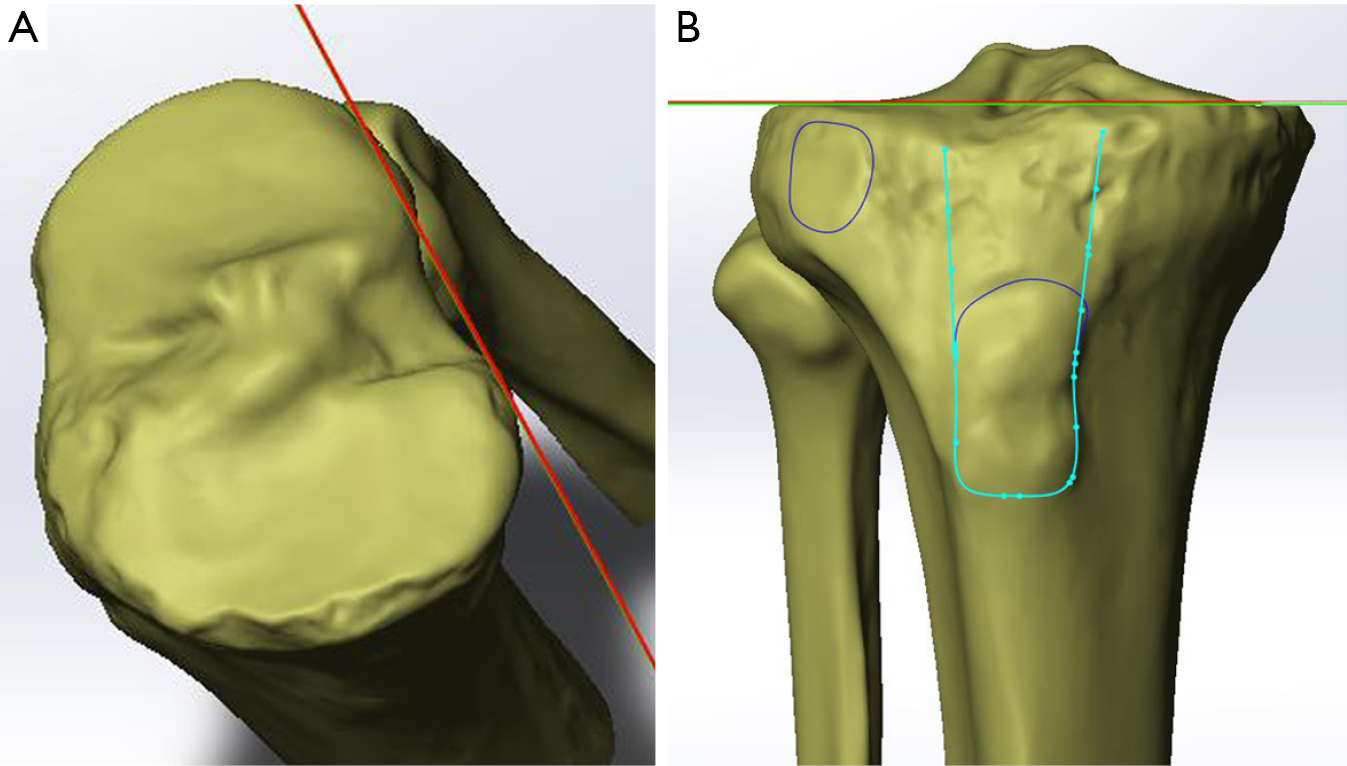 Figure 4 The bony landmarks of the tibia. (A) The plane which transverse the posterior edge (red line) of medial and lateral tibial condyle was selected as the reference plane. (B) The Gerdy’s tubercle (blue circle) and the tibial tubercle (blue line) were marked. The edge of patellar tendon was marked also (green line).

Statistical analysis was performed with use of Microsoft Excel for Windows 2000 (Version 97 SR-2).

We first examined the tunnel intersection utilizing the model with a PCL tunnel centered in the fovea. When the POL tunnel was cylindrical, we discovered that it would intersect the PCL tunnel at an angle ≤(29.00°±5.79°) (Figure 5A). As this angle was increased, it shifted the POL tunnel exit more anteriorly and violated the patellar tendon at an angle of ≥(30.75°±5.32°) (Figure 5B). When using the grenade-shaped tunnel, the same PCL intersection and patellar tendon violation occurred at angles ≤(27.40°±6.35°, Figure 6A) and ≥(29.60°±4.39°, Figure 6B), respectively (Table 1).

Multiple ligament injuries of the knee can result in instability and loss of function. Certain clinical scenarios, such as ACL ruptures with a concomitant low-grade MCL injury, have been successful with the non-operative management of the collateral ligament when the ACL is reconstructed. However, this is not the case in POL/PCL combined injuries. Here, we validated a technique to reduce intersection-risk when simultaneously reconstructing PCL and POL tibial tunnels, especially, we offered further guidance as to the trajectory of POL reconstruction tunnel in relation to Gurdy’s tubercle.

The cadaveric study of Petersen (11) examined the restraint of the superficial medial collateral ligament (SMCL), the deep medial collateral ligament (DMCL), the POL, and the posteromedial capsule in resisting posterior tibial translation after PCL sectioning. Petersen found a significant increase in posterior tibial translation after the sequential ligament sectioning of the posteromedial structures. POL proximally attached between the medial condyle of the femur and the adductor tubercle, fan-downwards attached to the posterior side of the tibia (12,13), and its main function is to prevent knee valgus and extorsion near the extended knee position, and to limit the forward and backward movement of the medial tibial plateau (14,15). Griffith deemed the POL with a maximum load of 256 N observed the highest load response to internal rotation near extension (15-18). POL has a much larger role than the SMCL and DMCL in resisting posterior tibial translation and internal tibial rotation. The study of Weimann (19) showed that the reconstruction of the POL contributes significantly to the normalization of coupled posterior tibial translation in knees with combined injuries of the PCL and the posteromedial structures when subjected to a valgus or internal rotational moment. Weimann concluded that knees with PCL injuries and associated medial/posteromedial ligament and capsular injuries have reconstructed structures.

During PCL single bundle reconstruction, there is no controversy about the location of the tibial tunnel portal, which is generally about 10 mm away from the tibial plateau and within the tibial footprint of PCL. However, the location of tibial tunnel during PCL double bundle reconstruction is still controversial. The anterolateral bundle of PCL on the tibia side lacks the basis for anatomical reconstruction, and even if the inner portal arrangement is designed to anteroposterior direction, it is still difficult to reproduce PCL anatomy, while the operation of internal and external arrangement reconstruction is much easier (23). Girgis (24) originally described the location of PCL insertion to be within the PCL fovea, reporting that it is inserted 2 to 3 mm distal to the articular plane. Takahashi reported that anterolateral bundle insertion is virtually located on the articular plane (close to 0 mm) and posteromedial bundle insertion is located a mean of 4.6 mm distal to the articular plane. Recent studies reveal that the bulk of PCL fiber inserts are on the posterior half of the PCL facet, leading to the recommendation for the tibial tunnel to be centered within the posterior half of the fovea during reconstruction (25,26). Colin concluded that the PCL tunnel should be placed just anterosuperior to the bundle ridge, with use of the lateral articular cartilage and medial meniscus attachment to guide placement on the tibia (27). Adam confirmed tibial placement of anterolateral bundle and posteromedial bundle centers should be located 8.4 and 2.5 mm superior to the radiographically visualized champagne glass drop-off of the posteroproximal tibia on the lateral radiograph, respectively, whereas the PCL attachment center should be 5.5 mm superior to it (28).

This study validated the previous study by Moatshe (29) and provided further guidance per tunnel trajectories during a multiple ligament reconstruction. Our study indicated that when reconstructing the PCL and POL simultaneously, utilizing a transtibial technique, an extremely small margin of error exists when drilling the POL tunnel. The reconstructive technique that provides the largest margin of error to prevent PCL tunnel intersection and patellar tendon violation uses a PCL tunnel that is centered in the posterior half of the fovea and the grenade geometry of POL tunnel. This combination provides a safe zone of approximately 12.95°. Given the difficulty of referencing the tunnel direction from the posterior tibial condyles intraoperatively, we recommend that the POL tunnel start just off the medial edge of Gerdy’s Tubercle and be aimed toward the lateral edge of the tibial tubercle. Our model suggests that utilizing these easily identifiable bony landmarks would likely maintain the trajectory of the POL tunnel within the above-described safe zone.

When simultaneously reconstructing the PCL and POL, utilizing a transtibial technique for both, placing the PCL tunnel at the posterior half of the fovea and using a grenade-shaped POL tunnel from the medial edge of Gerdy’s tubercle and exiting the lateral edge of the tibial tubercle best minimizes the risk of tibial tunnel intersection.

Conflicts of Interest: All authors have completed the ICMJE uniform disclosure form (available at http://dx.doi.org/10.21037/aoj-20-73). The authors have no conflicts of interest to declare.

Ethical Statement: The authors are accountable for all aspects of the work in ensuring that questions related to the accuracy or integrity of any part of the work are appropriately investigated and resolved. The study was conducted in accordance with the Declaration of Helsinki (as revised in 2013). The study was approved by Experimental Research Institute of Nanjing University of Chinese Medicine (No. A170609).