Charcot neuroarthropathy is a progressive chronic destructive arthropathy which involves the bones, joints and soft tissue of the foot and ankle. It is caused by various peripheral neuropathies, most frequently diabetes mellitus (1,2). Diabetes mellitus can lead to foot neuropathy and vasculopathy. A diabetic foot with increased vascular perfusion, due to autonomic dysfunction, and insensate joints subjected to repetitive microtrauma will suffer progressive joint damage, resulting in the typical destructive arthropathy (3). Clinically, the acute inflammatory phase is characterized by an erythematous and edematous foot with temperature difference greater than 2 °C compared with the contralateral site (3). Commonly, tarsometatarsal joints are the most affected, followed by the hindfoot, ankle and forefoot joints (4). With the destruction of the Lisfranc joint complex, longitudinal foot arch collapses, leading to rocker bottom deformity which can cause recurrent plantar ulceration, osteomyelitis, significant morbidity and, ultimately, foot amputation (5). Conservative management may heal plantar ulceration but, due to severe foot deformation, it is not enough to prevent recurrent plantar ulceration or restore foot’s anatomy. Thus, surgical reconstruction and stabilization the foot’s plantar arch is required (6). There are several types of bone fixation devices. Cannulated screws are not strong enough and can break easily. A combination of plates and screws can be stronger but, because it results in a bulkier construction, it usually leads to soft tissue complications. External fixation devices are a minimally invasive solution that can accomplish rigid fixation (7). However, these devices can be inconvenient to patients and carry a high risk of pin site infection. Recently, foot reconstruction using intramedullary solid fusion bolts have been described. As a single implant, several adverse events were reported, such as bone non-union, deep infection and screw breakage, loosening or displacement (8). We hypothesized that surgical reconstruction during non-acute inflammatory phase, complemented with medical treatment (plastered boot application and recurrent plantar ulceration care), can improve the stability of the mid foot construct and reduce adverse events. Furthermore, we hypothesized that using an additional intramedullary beam, bone graft augmentation and shortening the underlying osseous architecture will further improve the stability of the construction and promote foot arthrodesis.

We present the following article in accordance with the CARE reporting checklist (available at http://dx.doi.org/10.21037/aoj-20-93).

We present a clinical case of a 47-year-old patient, diabetic since 2003 and insulin treated since 2016. Clinically, the patient started with pronounced edema and erythema of the foot, neglected by himself. Then, the foot gradually deformed, eventually developing a recurrent plantar ulceration with limited walking ability. Referenced for the external consultation of orthopaedic surgery, clinical examination and convectional radiography revealed Charcot’s foot with rocker bottom deformity and plantar ulceration. The patient was initially submitted to conservative treatment with plastered immobilization and dressing care. After 5 months of medical treatment, edema and plantar ulceration were treated and the patient underwent surgical reconstruction the foot (Figure 1). At the start of surgery, Achilles tendon was stretched using a percutaneous approach. Then, two longitudinal incisions were made, one in the medial side of the foot and another over the 3rd metatarsal bone (Figure 2). Complete surgical removal of navicular and cuboid bones was performed (Figure 3). The resected bones were saved to serve as autologous bone graft for foot arthrodesis. Remaining cartilage was surgically removed to promote and achieve foot arthrodesis (Figure 4). The first metatarsal and the first cuneiform bones were aligned with the talar head. Three K-wires were used to stabilize the reconstructed medial column, two of them were crossing the first metatarsal, the first cuneiform and the talar head (Figure 5). One of the K-wires served as a guide for the drilling and insertion, in a retrograde fashion, of an intramedullary solid fusion bolt, fixating the reconstructed medial column. In order to stabilize the mid column and the mid/retro foot, a second solid fusion bolt was inserted, in an antegrade fashion, crossing the calcaneus and the third metatarsal. Finally, another K-wire was used to temporarily stabilize the lateral column, crossing the fifth metatarsal bone to the calcaneus. This last K-wire was purposefully left subcutaneously in order to be removed later. The remaining K-wires were removed and autologous bone graft, harvested from the navicular and cuboid bones, was employed. A plastered boot was applied and one window was made for dressing care (Figure 6). In the immediate post-operative period, walking without height bearing was allowed. 20 days in the post-operative period, stiches were removed and another plastered boot, this time with marching heel, was applied. For 3 months, the patient was allowed to walk with plastered boot and progressive weight bearing, as tolerated, till achieving total weight bearing. After the 3-month period, consolidation was achieved, the subcutaneous K-wire was removed as well as the plastered boot. During the 12-month follow-up period, no bolt breakage or dislocation was observed. The patient is able to wear shoes, walk in full weight bearing and without limitations or pain (Figures 7,8). 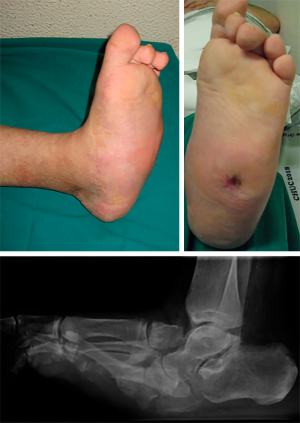 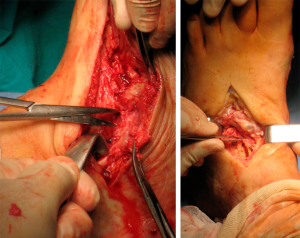 Figure 2 Incisions of the surgical reconstruction. 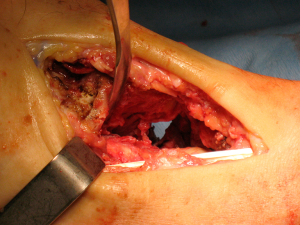 Figure 3 Charcot’s foot after the surgical removal of navicular and cuboid bones. 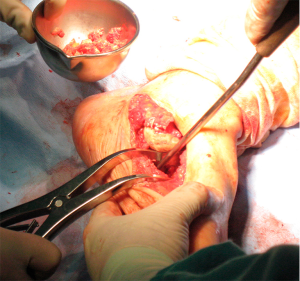 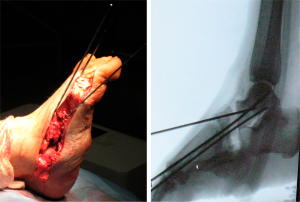 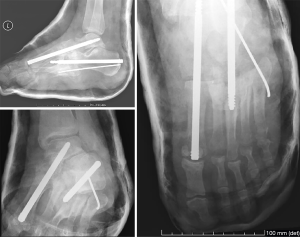 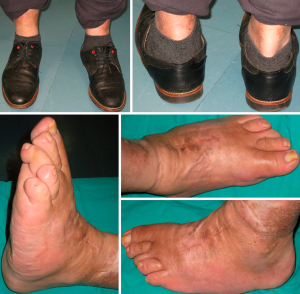 All procedures performed in studies involving human participants were in accordance with the ethical standards of the institutional and/or national research committee(s) and with the Helsinki Declaration (as revised in 2013). Informed consent was obtained from the patients for publication of this manuscript and any accompanying images.

The concept of medial column stabilization with a retrograde intramedullary solid fusion bolt, from the first metatarsal head to the talar body, might not be enough as a stand-alone technique (5). Intramedullary bolts are mechanically optimal fixation devices that can resist bending forces, which compromises bone union, and can be applied through a small incision, limiting additional soft tissue damage (8). Still, several adverse events using midfoot fusion bolt as a single implant were reported, such as bone non-union, deep infection and screw breakage, loosening or displacement (8). Therefore, it was suggested that this fixation method is to loosen for achieving foot arthrodesis, requiring additional implants to increase rotational stability (9). Rotational stability can be achieved by using additional intramedullary beams, crossing the second and third metatarsal beyond the talonavicular or calcaneocuboid joint. Despite additional fixation, up to 60% of the patients can suffer a fixation complication, such as dislocation or breakage of the midfoot fusion bolt (10-12). Both adverse events are closely related to a loose fixation of the construct, which conditions an insufficient bony healing and arthrodesis failure. In order to increase construction stability and improve bone healing, bone graft augmentation can be used. Current guidelines also recommend extending the arthrodesis far beyond the zone of injury, maximizing the contact between the fixation and the bone not compromised by Charcot’s disease (13). Shortening the underlying osseous architecture can facilitate reconstruction and minimize soft tissue tension (14). Therefore, removing navicular and cuboid bones can be fundamental to achieve a successful foot reconstruction, in severe foot deformations, and to minimize the risk of surgical complications. Lateral column was just temporarily stabilized with a K-wire because arthrodesis of lateral column increases foot stiffness and is associated with higher risk of developing post-operative non-union, pain, adjacent joints degeneration and stress fractures (15,16).

Careful planed surgical reconstruction of Charcot’s foot should be done in non-acute inflammatory phase. To achieve foot arthrodesis, rotational stability is mandatory which can be done by an extended fixation of the medial and mid foot columns, with intramedullary solid fusion bolts, and a temporarily stabilization of the lateral column with a K-wire. Bone graft augmentation and full contact plastered boot in the first 3 postoperative months can provide additional stability to the construct.

Reporting Checklist: The authors have completed the CARE reporting checklist. Available at http://dx.doi.org/10.21037/aoj-20-93

Conflicts of Interest: All authors have completed the ICMJE uniform disclosure form (available at http://dx.doi.org/10.21037/aoj-20-93). The authors have no conflicts of interest to declare.

Ethical Statement: The authors are accountable for all aspects of the work in ensuring that questions related to the accuracy or integrity of any part of the work are appropriately investigated and resolved. All procedures performed in studies involving human participants were in accordance with the ethical standards of the institutional and/or national research committee(s) and with the Helsinki Declaration (as revised in 2013). Informed consent was obtained from the patients for publication of this manuscript and any accompanying images.